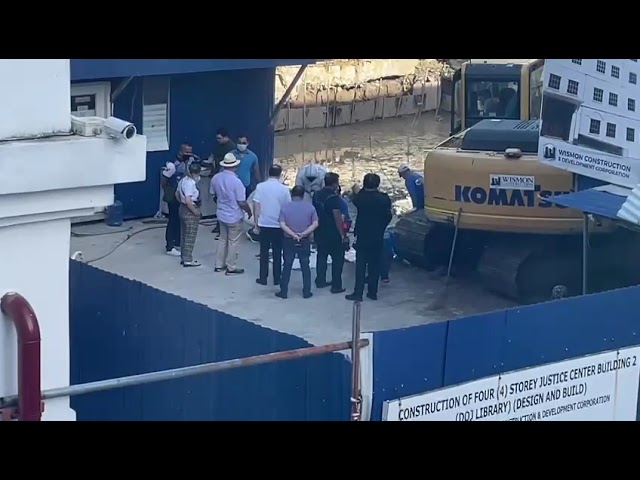 MANILA, Philippines – Skeletal remains were recovered by authorities inside the Department of Justice (DOJ) compound in Padre Faura street, Manila on Thursday, November 24.

The remains were recovered during an excavation within the DOJ premises which is intended for the construction of the prosecution building.

DOJ and National Bureau of Investigation (NBI) officials are now checking the remains.

“We will have the same examined,” Justice Secretary Crispin Remulla told reporters, referring to the remains recovered. The DOJ chief added the NBI will conduct the examination.

In an interview with reporters, DOJ Undersecretary Brigido Dulay said they recovered a skull and fragments of skeletal remains after it was reported to them that remains were discovered. Dulay added they will wait for the NBI’s report.

Here’s another video taken during the recovery of remains. pic.twitter.com/ohY78U7OT8

(The NBI forensics has the expertise on this so maybe we should give them a bit more time to check on the details of the remains we recovered here in DOJ.)

The DOJ official said they will temporarily stop the construction in the portion of the land where the skeletal remains were retrieved.

“In the meantime, medyo ’yong parts kung saan nahanap medyo hold muna ’yon. ‘Yong ibang parts naman na unaffected, baka puwede naman nang ituloy (In the meantime, we will temporarily hold the area where the remains were found. We can proceed with the construction on the unaffected areas).”

In a tweet, forensic expert Dr. Raquel Fortun said discoveries like this have already “happened before.” She added that the remains should be referred to anthropology or archaeology experts of the University of the Philippines.

Fortun’s tweet was referring to the damage suffered by Manila before the end of World War II, when the city was almost reduced to a rubble.

This is not the first time skeletal remains were discovered in the DOJ compound.

A GMA news report said that in 2009 human remains were also recovered in an excavation inside the DOJ compound. – Rappler.com