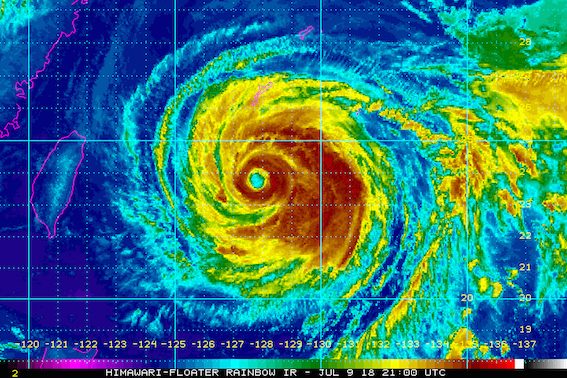 MANILA, Philippines – Typhoon Gardo (Maria) slightly weakened again before dawn on Tuesday, July 10, but it continued to enhance the southwest monsoon or hanging habagat, which is bringing rain.

In a briefing past 5 am on Tuesday, state weather bureau PAGASA said Gardo now has maximum winds of 170 kilometers per hour (km/h) from the previous 185 km/h and gustiness of up to 210 km/h from the previous 225 km/h.

Residents of these areas primarily affected by the southwest monsoon should be on alert for possible flash floods and landslides, especially in low-lying or in mountainous areas. (READ: FAST FACTS: Tropical cyclones, rainfall advisories)

The rest of Luzon and Western Visayas also have scattered rainshowers and thunderstorms due to the southwest monsoon. Flash floods and landslides are possible, too.

Based on its latest forecast track, Gardo will leave the Philippine Area of Responsibility (PAR) either Tuesday evening or Wednesday morning, July 11. Its exit could happen as early as Tuesday evening due to its relatively fast speed. (READ: PAGASA: Typhoon Gardo different from Yolanda)