Nearly 4 years later, only 4 of 470 bodies buried in Marawi identified BODIES. Recovered bodies from Ground Zero were processed by PNP Crime Lab 10 and then buried at Maqbara Cemetery in Marawi City on September 9, 2017.

Three years and six months after the end of combat operations in Marawi City, and almost four years since the siege began, the Philippine National Police (PNP) Crime Laboratory is still seeking DNA samples from relatives whose family members went missing during the six-month war.

In a police briefing Wednesday, May 12, PNP Crime Laboratory 10 chief Police Colonel Ruel Vacaro said that they are still looking for relatives to come forward so DNA samples could be taken from them and matched with the PNP’s database of remains.

Vacaro said that since the war started, PNP Crime Lab 10, based in Cagayan de Oro City, was able to process 470 remains for the database.

“We were able to get DNA samples [from] these remains; the problem is we were only able to match 4 remains to their families,” Vacaro said.

Data from Crime Lab 10 showed that only 124 relatives came forward to have their DNA matched, and that only four from the lot came back positive, meaning a body was proven to be one of their family members.

Vacaro said one of the reasons few have come forward was that the government’s call was only made among residents in and around Marawi City.

“What I suggested to Taskforce Bangon Marawi (TFBM) is that we need an information drive across the Philippines, and not just limit the call in Marawi and Lanao del Sur,” Vacaro said. Marawi City civic leader Drieza Lininding, chairperson of the Moro Consensus Group, supported Vacaro’s opinion, saying that at the height of the war, many residents had left Marawi City.

“Families were separated; even the families of survivors went to different places. It took several months before they were reunited,” Liningding said.

“Their priority is their survival, and the places they ended up [in], they [didn’t] have access to [a] crime lab because the war was still ongoing,” she added.

Lininding also pointed out that many would be scared of going to a crime lab to begin with.

“One of their fear[s] is that if they look for their family members, especially if it’s their sons, they might be accused of being members of ISIS,” she said.

Vacaro also acknowledged this. “Many wouldn’t come forward because of fear of being accused of being a member of ISIS, but they should not fear. We want thousand of samples so we can match this with our data and they can have closure,” he said.

“There were moves by the TFBM to give P10,000 to those who can prove that they lost their loved ones,” Lininding shared.

The cash incentive, however, was problematic, as the government does not give death certificates for missing persons.

“It is so difficult to do. You get only get P10,000 but you need a death certificate – which is difficult, because where will you get one?” Lininding said.

This was the situation in which Adman Rasuman had ended up.

At the start of the Marawi siege, Rasuman asked his cousin Usman Aburhaman Tomawis, then 39 years old, and his two children, Sittie Aina, then 7, and Allinor, then 9, to stay behind to look after their ancestral home. Tomawis, in turn, asked Rasuman to take his other daughter, Nur-Salima, with them.

Tomawis, Sittie Aina, and Allinor were never seen again after the war broke out.

Later on, upon learning of the government’s call for DNA samples, Rasuman then went to PNP Crime Lab 10 office with Nur-Salima’s sample in an effort to locate her missing father and siblings. Until now, they have heard nothing from the crime lab.

After his visit to the lab, Rasuman was also accused by the PNP of being a member of ISIS. The investigation was only scrapped after he was vouched for by one of his relatives, a police major.

Rasuman also said that he tried getting a death certificate from the government so Nur-Salima could claim compensation and get a scholarship grant. They were turned down as they had no bodies to present.

Demotivated by the experience, he said that he would just wait for the time when the government declares those missing in the Marawi war as dead.

Lininding also pointed out that residents of Marawi aren’t motivated to give their DNA samples given that the siege was some time ago.

“[P]eople moved on. Many have chosen to forget Marawi,” she said.

One alternative, she offered, are the non-government organizations (NGOs) that document dead and missing persons.

“Perhaps this is the right time to revive this (documentation). There is lack of information, there is no counseling, (for families),” she said. 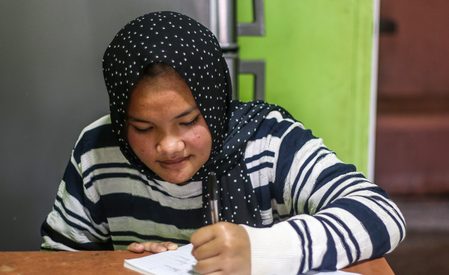 Lininding added that the government should also raise the compensation given to family members of the missing and the dead.

As for Vacaro, he said that the crime lab will always welcome families who come forward to provide their DNA sample.

“I have lobbied that crime lab[s] will process their DNA samples wherever it is given in the Philippines. It shouldn’t only be available in Marawi,” he said. – Rappler.com