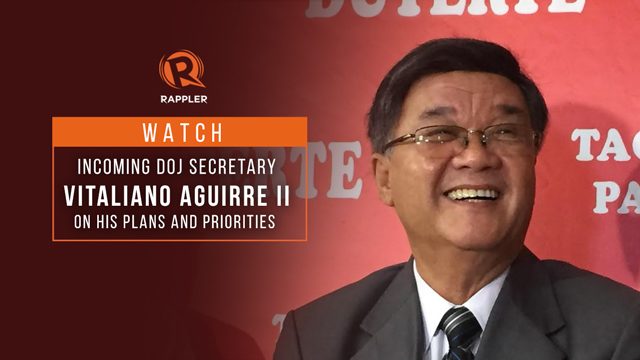 MANILA, Philippines – Incoming Justice Secretary Vitaliano Aguirre II said that his priority under the administration of President-elect Rodrigo Duterte is to cleanse and reorganize the problem-plagued Bureau of Corrections (BuCor) – particularly the New Bilibid Prison (NBP) in Muntinlupa.

In an interview with Rappler on Thursday, June 23, Aguirre detailed his plans on solving issues within the NBP.

In the past, BuCor and the NBP made headlines due to issues of corruption, drug trade, and violence.

“Because of what’s happening within BuCor, I think this will be the first mission which we’ll accomplish,” he said.

He plans to eliminate drug trading in prisons, especially since “about 75% of drug transactions are cooked in Muntinlupa” – mostly by detained Chinese druglords.

He explained that despite detention, drug transactions were still made possible by the use of cellphones inside.

Although jammers were already installed inside the NBP to eliminate drug transactions via cellphones, Aguirre admitted that the druglords have found ways to bypass them.

“After I found that out, I asked my friends who are techy and asked them to look for a jammer that can’t be overcome by druglords. They’re able to find one machine made in Israel costing P10 million. They said we’re sure it won’t be overcome,” he narrated.

Where are they going to get the funds to purchase this device?

Within the institution, Aguirre said his plan is to change every “tainted” personnel and guard.

Aguirre’s plan is to retrain the NBP personnel, and get PNP Special Action Force (SAF) members to temporarily stay in the NBP.

He also believes that the physical structure of the NBP should be modified, since it is “no longer appropriate for today’s penal institution.”

According to the International Centre for Prison Studies (ICPS), the Philippines has the fourth most overcrowded prison system in the world.

“I interviewed superintendents, and they proposed that the structure be destroyed, and we find a new one,” he said.

There used to be a plan to transfer the NBP to a new institution in Nueva Ecija, with an allocated budget of P50 million.

However, Aguirre claimed that the plan was no longer pursued because the high cost for the new building was found to be overpriced.

“If we could just sell this Muntinlupa area, which is around 200 hectares, that would be enough to build a new building for prisoners,” he said.

Stamping out corruption within the DOJ and its attached agencies is one of the main tasks of Aguirre as soon as he formally assumes his post as justice secretary.

“Unfortunately, because of big bureaucracy involved in DOJ all over the Philippines, corruption exists,” he said.

Apart from BuCor, he also identified corruption involving public prosecutors, as well as in agencies such as the Bureau of Immigration and Board of Pardons and Parole.

Aguirre said that they are also looking at the possibility of increasing the salaries of those working for DOJ-attached agencies – similar to the earlier proposed salary increase for policemen. – Rappler.com