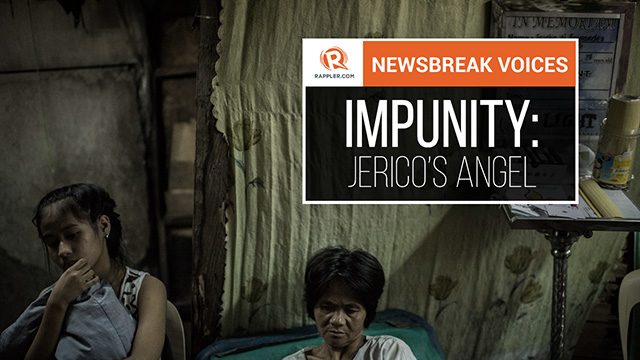 Facebook Twitter Copy URL
Copied
Jerico's family maintains he's not involved in illegal drugs, but the investigator says there's a 60% chance illegal drugs were involved, and a 40% chance a love triangle had been the cause

Listen to Part 1 and Part 2

MANILA, Philippines – Rumors are rife among the residents of Riverside about the events surrounding the deaths of Jerico Camitan and Erica Fernandez, even as investigators try to piece together the details behind the killings.

The cops earlier told Jerico’s father had eliminated drugs as a motive, but the investigator assigned to the case later said that there was a 60% chance illegal drugs were involved, and a 40% chance a love triangle had been the cause.

Police are still investigating the incident, looking for witnesses. The investigator believes Jerico was the target and that “the woman” had been collateral damage.

10-minute listen. Written by Patricia Evangelista, read by Chay Hofileña, edited by Emerald Hidalgo. If you missed the full story, you can read the text story here. – Rappler.com