FAST FACTS: List of Medal of Valor awardees and their privileges 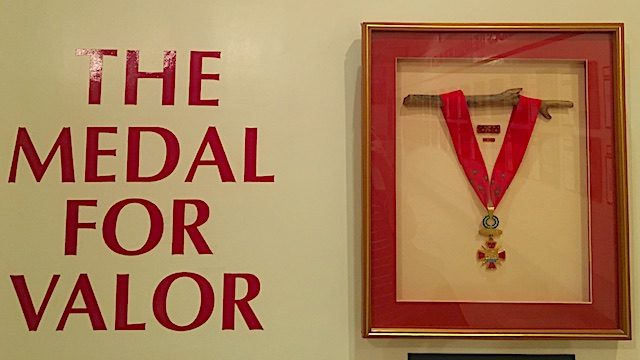 Facebook Twitter Copy URL
Copied
Marawi hero Army Captain Rommel Sandoval is the latest recipient of Medal of Valor. He is only the 41st to receive the award since 1935.

MANILA, Philippines – The Medal of Valor is the highest combat award the military gives to recognize soldiers who perform “a deed of personal bravery or self-sacrifice above and beyond the call of duty so conspicuously as to distinguish him above his comrades.”

The late Army Captain Rommel Sandoval, one of Marawi heroes, is only the 41st recipient of the most coveted combat award since 1935.

Before Sandoval, the last awardee was the late Private First Class Ian Pacquit, who died after he intentionally put himself in the line of fire to save his team. He was 21. (WATCH: Soldier killed in Zambo given highest military honor)

But it’s not always awarded posthumously. Seventeen out of the total 41 are still alive, and 5 of them remain in active service. (READ: Living heroes: 5 Filipino combat stories that won the Medal for Valor)

Living recipients get a monthly gratuity pay, which President Rodrigo Duterte last year increased to P75,000 from P25,000. They receive receive this on top of their salaries or pension. In the case of posthumous awards, the gratuity pay will go to their wives or their children.

The awardee, his widow, or her dependents are also entitled by law to be prioritized when applying for work in government, government housing program, loans not exceeding P500,000, and lease or acquisition of public lands.

They are exempted from paying tuition in public and private schools, universities, colleges, and other educational institutions. They can take up medicine or law.

If the children want to enter the Philippine Military Academy, they will also be priority for direct commision if qualified.

They are also entitled to get 20% discount from hotels, transportation services, restaurants, threaters, carnivals, and when buying medicines among others. Private establishments may claim tax credits.

Penalties for government officials or corporations that deny the awardee his privileges face up to 6 years imprisonment and penalty of up to P300,000.