Rappler Talk: Morales on victories, restoring credibility to the Office of the Ombudsman 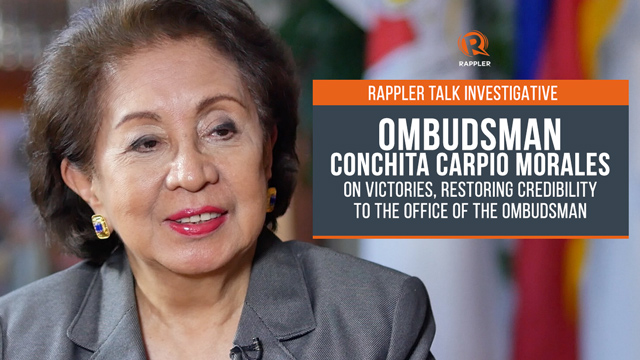 MANILA, Philippines – A month before her retirement, Ombudsman Conchita Carpio Morales believes she did well in restoring credibility to the Office of the Ombudsman.

In an interview with Rappler editor-at-large Marites Vitug, Morales talked about the challenges her office faced during her term and how she subscribes to the belief that success is “the respect you elicit from people.”

“If people like what you did, that to me is success,” Morales said.

“I’d like to believe [that we have achieved success] because people keep saying they now find the office credible, they find that I restored credibility,” she added.

Set to retire on July 26, Morales will be the first Ombudsman in 16 years to finish a full 7-year term. (READ: The search for the next Ombudsman)

Though she faced criticism and threats – including from President Rodrigo Duterte – she said these never caused her or her office to back down.

“I was never scared and I was prepared to meet any such [criticism], if there were any,” she said. “We never heeded them because we know we were deciding cases in accordance with the facts and applicable law.”