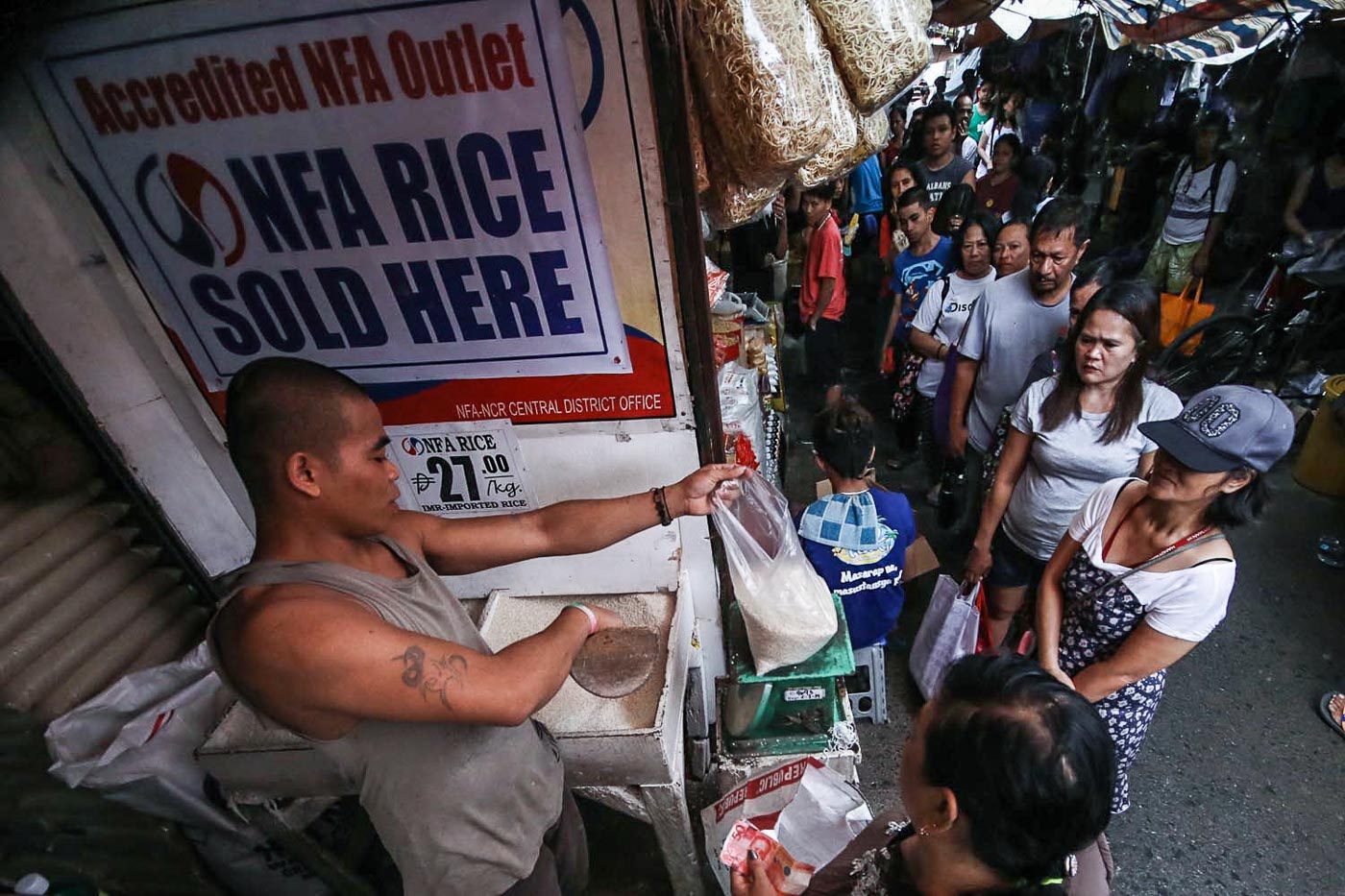 Facebook Twitter Copy URL
Copied
A kilo of rice costs almost P50, and even P66 in Sulu, as of the 4th week of September 2018

MANILA, Philippines – How much a kilo of rice costs has a major impact on how Filipino families eat, or if they will eat at all.

Despite the price increases, the President and his spokesperson have denied there is a rice shortage in the country. But should we get worried?

Take a quick look at the numbers and controversies revolving around our staple food.

Rice crises, past and present

Rice available in the market has two types: regular milled rice (RMR) and well-milled rice (WMR). The latter is more expensive, but the prices for both have been increasing since 2007. Rice prices data with the Philippine Statistics Authority (PSA) go back to January 2007 only.

RMR is rice in which 10%-30% of the lengthwise streaks of the bran layer (hard external layer) are still present on the kernel, while WMR has only less than 10% of bran layer presence. In short, RMR is less polished than WMR.

A 2009 research done for the Center for Global Development attributed the escalating prices during the crisis to 4 reasons:

There was also a spike in rice prices in 2014 during Benigno Aquino III’s administration. The year started with increasing prices since May 2013. WMR retail was at P39.49 in January 2014 and reached its highest on September 14 at P44.02. Since then, prices have decreased till January 2018.

According to economist JC Punongbayan, the 2008 rice crisis was more global in nature while the crises in 2014 and 2018 were “self-inflicted” due to bad policies and corruption.

Since January 2007, the highest price for retail WMR was felt in the 4th week of September, when it reached a national average of P49.37. For Metro Manila alone, it was P48.

In 2018, the province of Sulu in Mindanao had the highest price of retail WMR at P66 per kilo as of the 4th week of September, almost P17 higher than the national average. Second is Zamboanga del Norte at P58 and third are Mountain Province, Palawan, Bohol, Iloilo, and Southern Leyte, each at P55 per kilo. The cheapest price is in Tawi-Tawi at P34 per kilo.

But with rice shortage, surging prices, and weevil-infested rice, a crisis was again felt in the country.

Do we have enough rice?

The National Food Authority (NFA) is the public agency tasked to store stocks of rice and stabilize rice prices in the country to ensure food security. However, in early April, rice stocks of the agency were “completely gone.” During that time, the rice reserve went down to two days’ worth of supply instead of 15 days which the NFA is required to maintain.


The NFA rice is subsidized by the government, therefore making it cheaper. Household rice is what people stock for themselves while commercial rice is what can be bought in the market.

Instead, the NFA chose to import 250,000 metric tons of rice from Vietnam and Thailand. The latter delivered 133,000 sacks of rice on August 2 in Subic Bay Freeport Zone.

Later on, the majority of the sacks were discovered to have been infested with rice weevils.

Since 2012, “NFA rice” or the cheaper version of commercial rice reached its lowest stocks inventory level yet in June 2018 according to the agency’s Beginning Rice Stock Inventory, reaching up to only 21,000 metric tons.

There was also the issue of weevil infestation. On August 22, NFA authorities said that at least 100,000 sacks of imported rice from Thailand were infested by bukbok or rice weevil.

The NFA said that rice is safe to eat after fumigation. Department of Agriculture (DA) Secretary Manny Piñol even did a demo on live television on August 31, showing that eating the rice is safe.

The President initially denied the problem of rice shortage and said there is “ample” rice supply. He later admitted that prices of goods, particularly rice, have increased and suggested ancient barter trade as a solution.

While denied by Piñol, there are reports of the price of rice reaching as much as P70 per kilo in Zamboanga City. Rice prices have been on a steady increase since the start of 2018. (READ: Rice prices soar as Duterte marks 2nd year in office)

This could be traced back to low supply and the administration’s Tax Reform for Acceleration and Inclusion (TRAIN) law as mentioned by a  2018 study by the Philippine Rice Institute (PhilRice) under the DA. The study found that operational expenses of farmers increased (including the cost of gasoline used for machines), while decreasing profit by 10%.

The PSA announced that the inflation rate which hit a 9-year high of 6.7% in September also affected rice prices.

How do leaders propose to solve the crisis?

Senator Cynthia Villar proposes to declare a state of calamity on rice, impose price controls, and put a high tariff on high imports while providing subsidies to local farmers to make them competitive with foreign suppliers. A tariff is a payment on imports or exports that enter and exit a country’s market.

There are also calls to abolish the NFA and fire its executives, along with Piñol.

On October 8, 2018, President Rodrigo Duterte decided to greenlight the lifting of restrictions on rice importation following a “fierce” discussion between Piñol and Finance Secretary Sonny Dominguez during a Cabinet meeting.

Dominguez reportedly pushed for lifting restrictions, while Piñol wanted to impose an obligation for rice to be sold at certain prices. — Rappler.com