Dec 18, 2018 4:37 PM PHT
Rappler.com
Facebook Twitter Copy URL
Copied
Join us as Rappler senior editors sit down to discuss how key events in 2018 shaped the nation and what to expect in 2019 – an election year 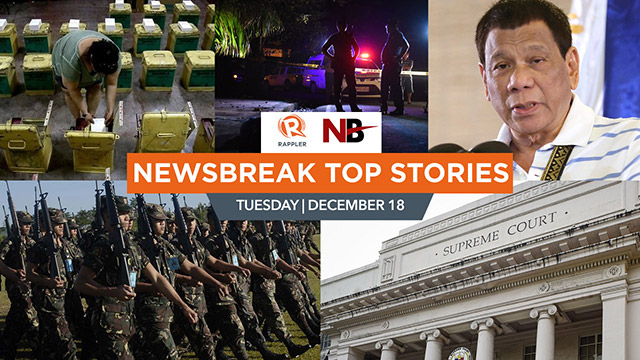 Bookmark this page to watch and join the discussion live on Tuesday, December 18, at 4 pm!

MANILA, Philippines – December marks the end of a roller-coaster year full of controversies and incidents in the Philippines.

Among others, the year 2018 marks President Rodrigo Duterte’s second year in office, the year when a Supreme Court chief justice was ousted, another opposition senator was arrested, the wife of the late dictator was convicted of plunder (but still remains free), and an alleged corrupt politician was acquitted by the anti-graft court.

On Tuesday, December 18, Rappler senior editors will sit down to discuss how these key events in 2018 shaped the nation and Filipinos as a whole. The team will also talk about what to expect in 2019 – an election year.

How will the next years of the Duterte administration look like? What will the challenges ahead be and what possible controversies could be brewing in the background?

Join us on Tuesday, December 18, at 4 pm as we make sense of the year about to end and the year about to start! Let us know in the comments below or tag us on Twitter (@newsbreakph) if you have any questions! – Rappler.com