Feb 6, 2019 3:00 PM PHT
Rappler.com
Facebook Twitter Copy URL
Copied
CHR Chairperson Chito Gascon sits down with Rappler editor-at-large Marites Vitug on Wednesday, February 6, to discuss what the future holds for the Philippines as a non-member of the International Criminal Court 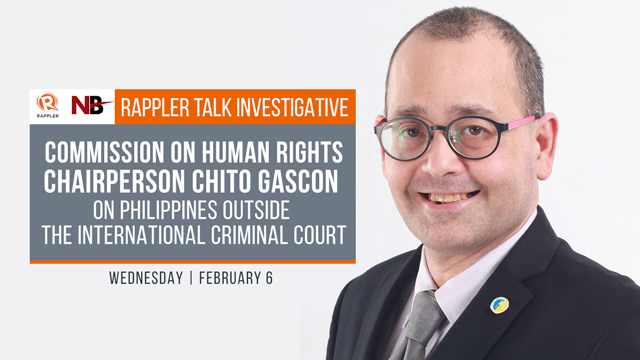 Bookmark this page to watch and join the discussion live on Wednesday, February 6, at 3 pm!

MANILA, Philippines – The Philippines may be out of the International Criminal Court (ICC) after the withdrawal initiated by President Rodrigo Duterte takes effect on March 15.

Last year, Duterte ordered the Philippines’ withdrawal from the ICC. This was after the ICC’s Office of the Prosecutor began its “preliminary examinations” to determine whether there is sufficient evidence to establish that the case against Duterte – accused of crimes against humanity before the court – falls under its jurisdiction.

The Philippines’ ICC withdrawal is being challenged before the Supreme Court. (READ: Playing the cards right? Politics of ICC oral arguments)

On Wednesday, February 6, Commission on Human Rights (CHR) Chairperson Chito Gascon sits down with Rappler editor-at-large Marites Vitug to discuss what the future holds for the Philippines as a non-member of the ICC, especially in the context of the Duterte administration’s bloody campaign against illegal drugs.

Human rights lawyers and advocacy groups have called the ICC withdrawal as “anti-people” as it “exposes Filipinos to possible atrocious crimes without resort to justice and accountability.”

Will this be the new reality after March 2019? Can the Philippines be part of the ICC again? Join us on Wednesday, 2 pm, for the discussion! – Rappler.com