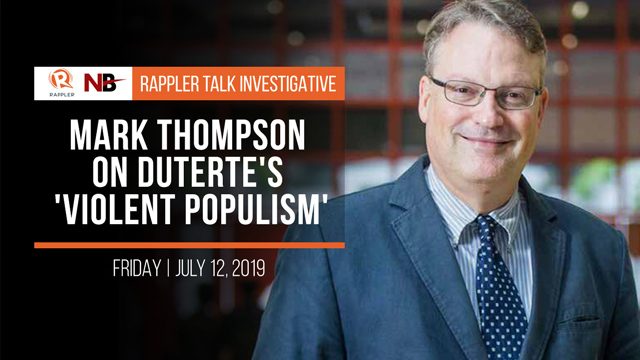 Facebook Twitter Copy URL
Copied
On Friday, July 12, Rappler editor-at-large Marites Vitug sits down with Mark Thompson, an expert on Southeast Asian politics, to discuss the past 3 years of the Duterte presidency and the continuing support of Filipinos for the President

Bookmark this page to watch the interview at 3 pm on Friday, July 12!

MANILA, Philippines – President Rodrigo Duterte continues to be a popular leader despite the controversies that have surrounded his administration since 2016.

His popularity continues to soar amid the violent drug war that has led to thousand of deaths and his government’s inaction against China’s harassment of fishermen in the West Philippine Sea, among others.

On Friday, July 12, Rappler editor-at-large Marites Vitug sits down with Mark Thompson, professor of politics at the City University of Hong Kong, to discuss the past 3 years of the Duterte presidency, his administration’s key achievements, and what may be fueling Filipinos’ continued support for the President.

Thompson, considered an expert on Southeast Asian politics, started his work on Philippine politics in the 1980s with focus on the struggle of Filipinos against the late dictator Ferdinand Marcos. His research interests include democracy, authoritarianism, and political dynasties in Asia.

Is Duterte the new Marcos? Catch the interview live on Friday, July 12! – Rappler.com