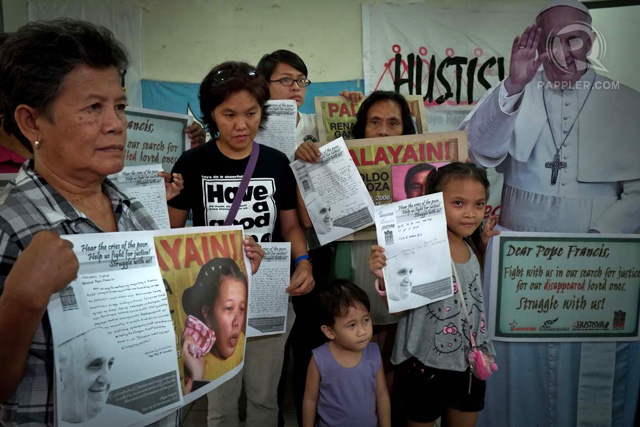 MANILA, Philippines – Families of political prisoners, missing persons, and victims of extrajudicial killings appealed to Pope Francis to intercede in the release of their loved ones, who are languishing in jails over what they say are “trumped-up charges.” They will send their personal letters through the bishops’ conference before the Pope’s visit next week.

There are almost 500 political detainees in various penitentiaries in the Philippines, according to human rights groups.

Felicidad R. Inandan, sister of the late Gregorio “Ka Roger” Rosal, former spokesperson of the Communist Party of the Philippines, said, “We hope that they will finally release my niece, who has been cleared of her charges.”

A pregnant Adrea Rosal was detained at Camp Bagong Diwa in Taguig, in March last year, over charges of kidnapping, murder and attempted homicide.  Her baby, Diona Andrea Rosal, died two days after being born. The human rights group Karapatan blamed the government of President Benigno Aquino III for the baby’s death.

According to Inandan, Vice President Jejomar Binay personally assured her last year that Rosal was going to be released soon. But she remains in prison.

On the other hand, this is the second letter that Nikki Gamara will be sending to the pontiff. She said she had previously sent an email through an Argentine cleric reportedly close to the Pope.

Nikki’s father, workers’ union organizer and peace consultant for the National Democratic Front of the Philippines (NDFP) Renante Gamara, was arrested in 2012 over an alleged case of “kidnapping with murder.”

Karapatan said Gamara’s arrest violates the Joint Agreement on Safety and Immunity Guarantees (JASIG), which assures the safety and immunity of consultants and staff of both the Philippine government and the National Democratic Front, which are involved in the peace process.

“We ask Pope Francis to hear our stories, to see the real situation in the Philippines, and to join us in our struggle for justice,” said Nikki.

Nikki’s mother is currently in hiding, following what she says are fabricated charges of 12 murders. Although she fears the possibility that she may become a political prisoner like her parents, the 25-year-old activist vowed to continue to fight for justice. 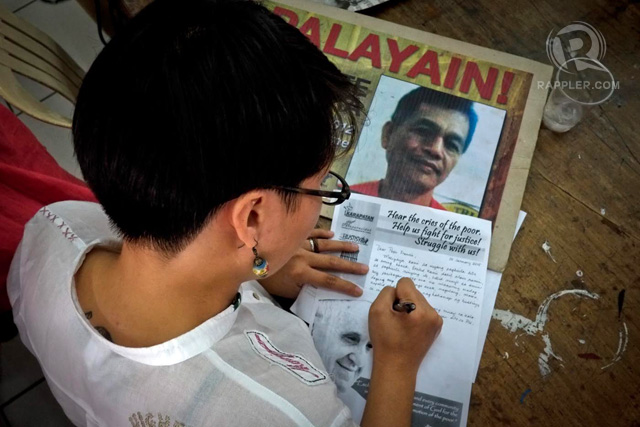 “Our son is innocent,” lamented Amador Cadano, the 57-year-old father of Guiller Martin, who was arrested by the military in Nueva Ecija in August 2014 on charges of illegal possession of firearms and explosives.

Guiller, 23, is an alumni of the University of the Philippines-Pampanga and youth organizer of Anakbayan Partylist. According to Cadano, his son was doing research on how farmers were going to be displaced by the construction of a highway in Nueva Ecija.

“They just want to make an example out of my son, that they can do whatever they want to anyone suspected of being a dissenter, and scare the people in the community,” Cadano claimed.

“The papal visits have positive historical significance in the struggle for human rights and justice in the Philippines,” said Karapatan secretary-general Cristina Palabay.

During Pope John Paul II’s first visit to the country in 1981, activists reportedly unfurled a big streamer that caught the eye of the pontiff. It called for the release of political prisoners, whose existence was denied by the government of the late President Ferdinand Marcos.

“The people’s movement raised the issue of the extent of political repression under the Martial Law Regime, specifically the release of all political prisoners, which was probably by the thousands,” Palabay explained.

Reports say Pope John Paull II later sent Cardinal Agostino Casaroli, Vatican Secretary of State, to personally look into the situation of political prisoners in the Philippines. This gave Marcos little choice but to release some of them. 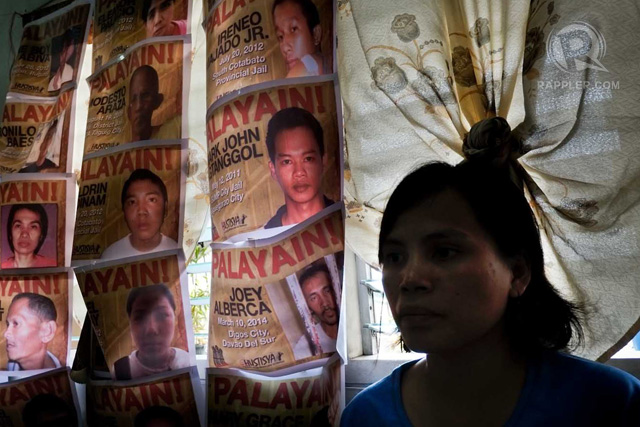 In 1995, during the term of President Fidel V. Ramos, political prisoners from the post-martial law era wrote a letter to Pope John Paul II on his second visit to the country. “They appealed to the Pope to intercede on their behalf. They went on hunger strike, and it resulted to their release,” Palabay recounted.

“We believe that the Catholic Church and the Vatican have compassion for victims of human rights violations,” said Palabay. “We are appealing to Pope Francis to call for the release of the political prisoners.” – Rappler.com