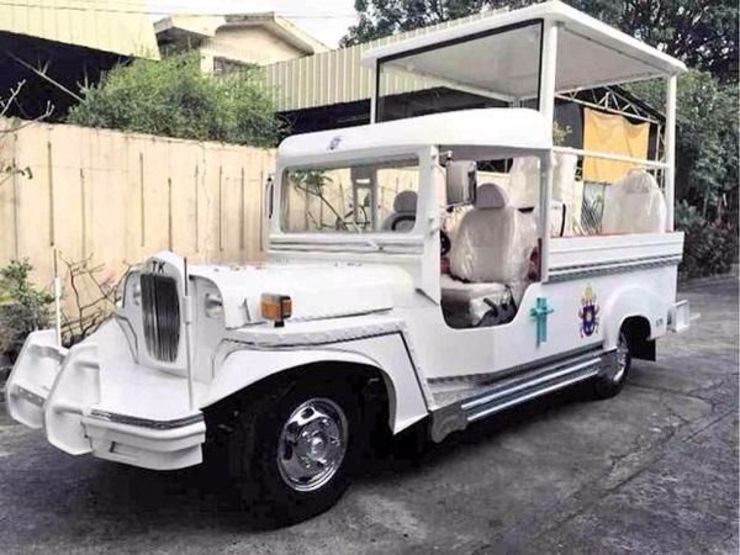 MANILA, Philippines – For his first trip to Asia in August last year, Pope Francis stunned South Koreans by his vehicle of choice: a small compact car – a Kia – that was in stark contrast to the Mercedes Benz luxury cars favored by his predecessors.

For his upcoming trip to the Philippines, the Pope will ride a vehicle similarly inspired by his preference for simplicity.

The Filipino jeepney would soon take its place in the list of vehicles used by the leader of the Roman Catholic Church.

The Vatican’s Pontifical Council for Social Communications on Saturday, January 10, posted an official photo of a modified jeepney that will be used by Pope Francis for his Philippine visit next week.

The popemobile – an informal name for the custom-made vehicles used for papal trips – is painted white, with chrome wheels, and bearing the papal insignia on its side. Two green glass crosses also adorn the vehicle.

There will be two popemobiles for Francis’ Philippine visit: one for his trips around Manila, and another for his travels in Leyte province.

#PopeInPH: This is the "popemobile" that will be used by Pope Francis in Philippines pic.twitter.com/N87zPfc7qQ

Organizers of the papal visit did not disclose additional information about the vehicles, citing security reasons.

But unlike the bulletproof vehicle that the late Pope John Paul II used for his 1995 visit in Manila, Francis will be riding in an open-style vehicle.

Officials earlier said the Pope did not want to ride in a bulletproof vehicle, preferring an open one that would make it easier for him to interact with the crowds.

Since the assassination attempt on Pope John Paul II in 1981, popemobiles have been fitted with bulletproof glass.

But Francis, who has asked organizers not to make elaborate preparations for his visit, has consistently favored much simpler vehicles than his predecessors.

The pope ditched the bulletproof Mercedes Benz popemobile in favor of open-top vehicles, saying that the glass-enclosed “sardine can” prevents him from interacting with people.

In March last year, he chose to leave out the papal vehicle entirely, preferring to ride in a bus with cardinals and bishops on the way to a spiritual retreat. – Rappler.com