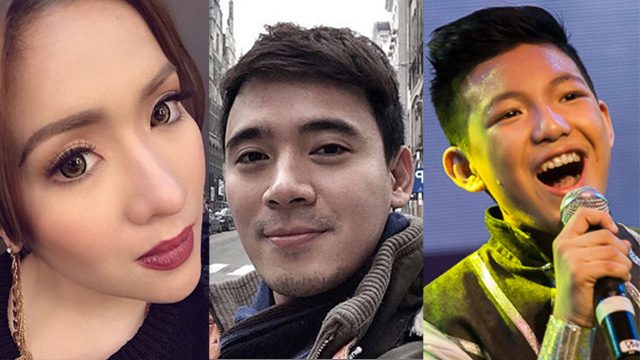 Facebook Twitter Copy URL
Copied
Darren Espanto, Angeline Quinto and Erik Santos will sing at the Luneta mass and Encounter of Youth in UST
MANILA, Philippines – More stars have been announced as part of the lineup of performers for Pope Francis’ visit.
In an interview on Bandila, Tuesday, January 13, Angeline Quinto and Erik Santos expressed their excitement to sing for the Pope.

“We Are All God’s Children”

(I am really honored to be chosen to sing the Responsorial Psalm on January 18 at the mass in Luneta. Hopefully, I pray that I can get close.)

(Every night, I think about how the huge crowd that is going to be there. i feel there will be many Pinoys who will cry if they see the Pope.)

In the same interview, The Voice Kids’ runner-up Darren Espanto said that he is very happy to sing “Tell The World of His Love,” for the audience in UST. The Voice Kids’ winner Lyca Gairanod will sing the song during the Pope’s gathering at the Mall of Asia Arena, Friday, January 16.

“To me, he is a symbol of kindness, spreading the message of mercy and compassion,” Darren said.

Aside from the 3 stars, Jed Madela and Jamie Rivera, who composed the song “We Are All God’s Children,” for the Pope’s visit will also sing during the special events. Jamie will perform the song at the Mall of Asia Arena on Friday. She also wrote another song called “Our Dearest Pope.” – Rappler.com