Jan 16, 2015 10:36 PM PHT
Facebook Twitter Copy URL
Copied
Meanwhile, the Vatican spokesman finds the Philippine president's speech 'interesting': 'You see what is the perspective of the politician and of the Pope. Two different perspectives.' 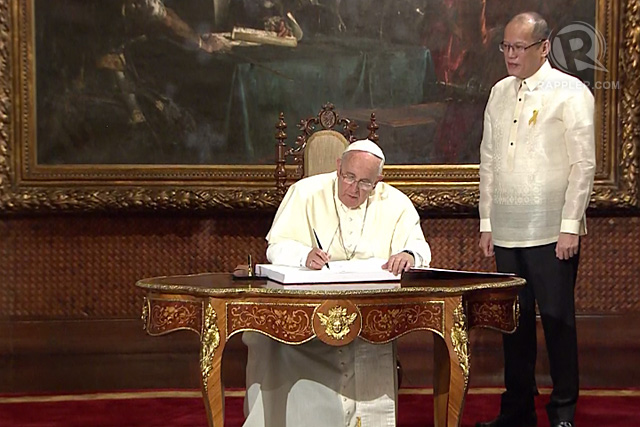 MANILA, Philippines – A criticism against the bishops’ silence on the alleged abuses of the previous administration? More like a commentary on the Arroyo years.

This was how Manila Archbishop Luis Antonio Cardinal Tagle saw the speech delivered by President Benigno Aquino III during the courtesy call of Pope Francis to Malacañang Palace on Friday, January 16.

In his speech before government officials and Church leaders, Aquino criticized some members of the clergy for remaining “silent” despite the alleged abuses committed by Aquino’s predecessor, President Gloria Macapagal Arroyo.

The speech drew mixed reactions, with some praising his honesty while others questioned the timing of his admonishment.

In a press conference late Friday, Tagle said the President’s sentiments seem to stem from both a personal and political experience.

Aquino is the son of the late Senator Benigno “Ninoy” Aquino Jr, who was assassinated in August 1983. His family suffered under the dictatorship of the elder Aquino’s political rival, Ferdinand Marcos.

Marcos was eventually overthrown in 1986, helped in part by a powerful Catholic Church, which urged millions of Filipinos to participate in a peaceful revolution. The Church was also influential in helping install Corazon Aquino, Ninoy’s widow, to the presidency.

As congressman of Tarlac and later senator, the younger Aquino and his Liberal Party were allies of President Arroyo. They started to distance from her after it was exposed that she rigged the 2004 presidential elections, which Aquino and LP helped her win.

He has since strongly criticized the Arroyo administration for alleged corruption and, since assuming the presidency, blamed her for the difficulties encountered by his government.

But there is a political aspect to it as well, he added.

“In many of [Aquino’s] speeches since becoming president, he has referred to previous administration and how he has inherited some of the problems of the former administration. So I hear a bit of that in the speech today,” he said.

“While the silence of some bishops were mentioned, I think it is still a commentary on the previous administration,” Tagle added.

The archbishop also appealed to reporters not to let the speech overshadow the papal visit.

“I hope we will not lose our focus on the Pope. The Pope will be here only for a few days but the president stays, and we can continue exploring his speech even after the return of the Holy Father to the Vatican,” he said.

For his part, Vatican spokesman Father Federico Lombardi said the President’s speech was “original” and “interesting.”

“The speech of the President, for me, was rather original because there is not always such a speech during the formal ceremonies of reception of the Pope,” Lombardi said.

He added: “But it was also very interesting. You see what is the perspective of the politician and of the Pope. Two different perspectives.”

Lombardi added that although the Pope “has not had direct experience of the situation in the Philippines” to comment on the issue, the pontiff did deliver a “very general speech” that addressed the problems mentioned by Aquino in his speech.

In his speech at the presidential palace, Francis urged government officials to reject corruption and to fight against social inequality and injustice.

He repeated the same call during a homily at the Manila Cathedral, his first Mass in the Philippines and first liturgical encounter with Filipino priests. – Rappler.com