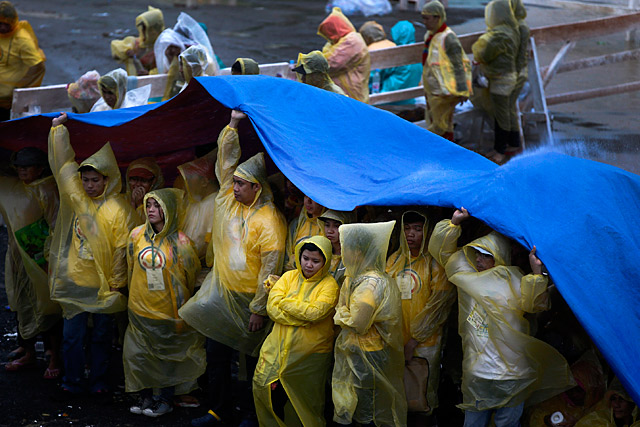 MANILA, Philippines (4th UPDATE) –  An aid worker died after a scaffolding by the stage where Pope Francis said Mass for disaster survivors in Leyte collapsed on Saturday, January 17.

Kristel Mae Padasas, 27, was pronounced dead at around 2 pm at the St Paul’s Hospital in Tacloban City, Health Secretary Janette Garin told Rappler. She worked with the Catholic Relief Service (CRS) during the Yolanda humanitarian crisis.

Pope Francis, in opening his message for the youth at the University of Sto Tomas on Sunday, January 18, called for a moment of silence to pray for Padasas.

“She works for the organization (CRS) and (helped) prepare for that very mass. She’s 27 years old. Young like yourselves,” the Pope said.

“Let’s also pray for her parents. She was the only daughter. The mom is coming from Hongkong. The father has come to Manila to wait,” Pope Francis said.

Garin said the cause of death was “massive blood loss” due to a major injury on her head.

Padasas was fighting for her life when she arrived at the hospital at around 12:55 pm, Garin said. About that time, Pope Francis was rushing back to the airport to catch his 1 pm flight to Manila.

“It is unfortunate that it happened shortly after she was able to see the Pope in person,” Garin said, extending her agency’s condolences to the Padasas family.

In Manila Saturday evening, Vatican spokesman Federico Lombardi said, “The Pope has been informed of the death of young woman in Leyte.”

The pontiff, he said, had asked for information on the young woman’s family to send his condolences.

The scaffolding collapsed at the new apron of the Tacloban airport after the Pope’s Mass. Padasas was waiting for the papal convoy when strong wind blew away the scaffolding supporting a speaker stack that hit her in the head, Mover Nico Acebedo reported via Viber.

Jose Llacuna, director of the Center for Health and Development for Eastern Visayas, earlier told Rappler about the incident.

“Twas an unfortunate accident, female in her 20s, from Manila. Waiting pa for more details. Family to be informed through co-employees. May her soul rest in peace,” Llacuna said.

Padasas’ family in Bicol has already been informed about the accident, Garin said. Padasa’s body will remain in Tacloban until the weather improves and allows her transfer to Bicol.

Meanwhile, 3 people who attended the papal Mass were rushed to a Tacloban hospital after they were pinned by a barricade, the Philippine Red Cross (PRC) reported.

As of 1 pm, Saturday, the PRC in Tacloban served at least 391 patients who attended the papal Mass. – Rappler.com