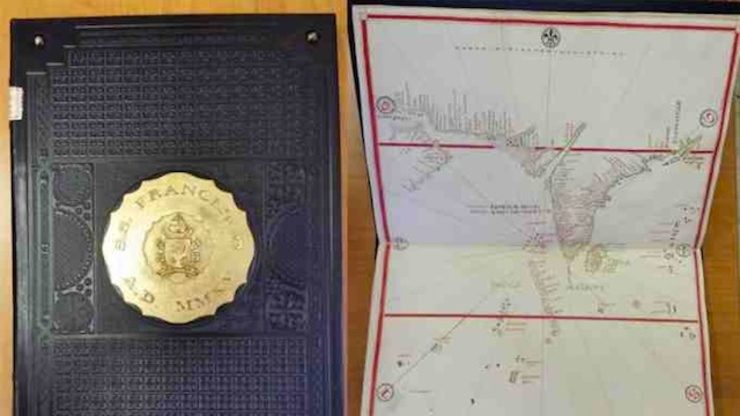 Facebook Twitter Copy URL
Copied
Pope Francis gifts President Benigno Aquino III an old atlas of the world, of which there are only 50 copies ever made

This is what Pope Francis gave President Benigno Aquino III as a gift when he came to visit him in Malacañang on Friday, January 16.

The atlas from the Vatican Library, according to the Catholic News Agency, maps “the world as Europeans knew it in the 16th century.”

The website said the Philippines’ upcoming 500th anniversary of the proclamation of the Gospel may be “likely why” the Pope chose that gift to give Aquino.

Inside the atlas are 14 nautical maps written on parchment. The collection of maps is only one of 50 in the world – with the original one dated as far back as 1562.

The atlas is attributed to mapmaker Bartolomé Oliva, who hails from Majorca.

In exchange, Aquino gave the Pope a commissioned sculpture of Mary, Undoer of Knots, whose representation in a painting inspired the Pope’s devotion while he was studying in Germany.

The statue was carved from wood taken from a former landmark in Malacañang – a century-old acacia tree which used to stand in front of Malacañang’s Kalayaan Hall until it was felled by Typhoon Glenda in July 2014.

The statue was carved by Laguna native Fred Baldemor, known for his religious sculptures of wood, bronze and marble. In a statement, the Palace said it chose the sculpture because it reflected “the story of the Filipino people.”

“We see the beauty of faith and the strength of devotion, amidst the suffering and challenges of life,” Malacañang said.

The President also presented the Pope with two commemorative coins bearing the pontiff’s image – P50- and P500-limited issue coins – from the Bangko Sentral ng Pilipinas (Central Bank of the Philippines).

Pope Francis is in the country for a 5-day state and pastoral visit. He leaves the country on Monday, January 19. – Rappler.com