Behind the scenes: The Pope most Filipinos didn’t see

Feb 1, 2015 5:45 PM PHT
Paterno Esmaquel II
Facebook Twitter Copy URL
Copied
'There is no difference between how he is in public and how he is in private,' the head of the Catholic Bishops' Conference of the Philippines tells Rappler 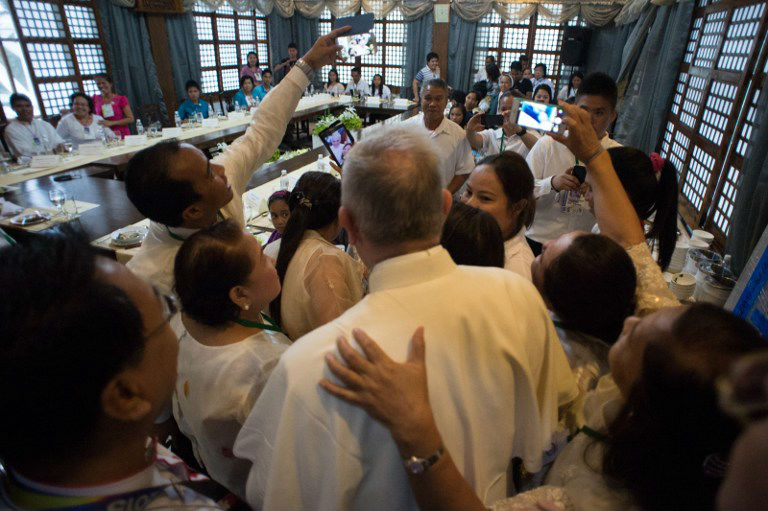 MANILA, Philippines – Days after Pope Francis left the Philippines, anecdotes from different people, who met him privately, revealed the person he is when the cameras stop rolling.

Who is Francis behind the scenes?

“There is no difference between how he is in public and how he is in private,” the president of the Catholic Bishops’ Conference of the Philippines (CBCP), Lingayen-Dagupan Archbishop Socrates Villegas, said in an interview with Rappler on Friday, January 30.

To paint a picture of Francis as he is in private, Rappler compiled mostly unheard stories about the Pope in the Apostolic Nunciature or the Vatican embassy in Manila, aboard the papal plane, and in Leyte, the province worst hit by Super Typhoon Yolanda (Haiyan) in November 2013.

This is the Pope most Filipinos didn’t see.

1. Pope to nuncio: ‘Did you change anything?’

After all, this is a simple Pope who chose to live in a guesthouse at the Vatican, not the Apostolic Palace. 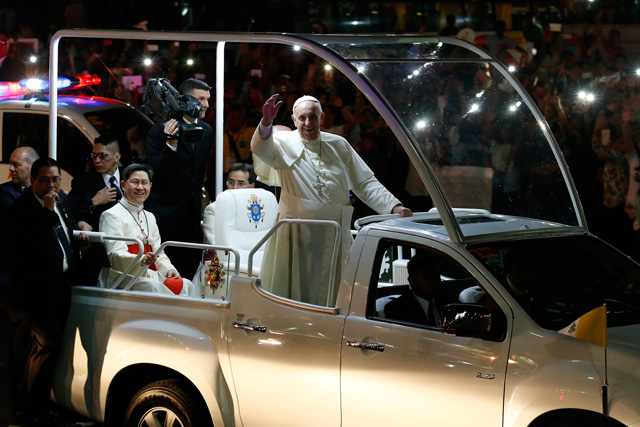 “So when he came,” Villegas recalled, “the first question he asked was, ‘Did you change anything here?’ And of course, the Apostolic Nuncio said, ‘Nothing, as you instructed us.’”

The Pope replied, “But what is the difference between now and when you were using it?”

“And the Nuncio said, ‘It’s cleaner,’” a laughing Villegas recalled. “So he understood that you just have to clean it for him. And that’s him, that’s him.”

2. Pope gets choice to say Mass in backstage

For around 10 minutes after the Pope reached the backstage, the thousands at the Tacloban Airport waited. Rob Roa, a Jesuit volunteer, described this as one of their “tensest moments,” after the Pope “was hurried into a private tent.”

In a blog for Rappler, Roa said the crowd “was advised that Pope Francis could either celebrate Mass on a smaller altar in the stage background away from the rain, or in the tent” while everyone else “watched on the many giant screens around.”

Villegas would never forget the scenes in that private tent, which served as a sacristy, where priests wear their robes and prepare for the liturgy.

“In Tacloban, he was given an option to celebrate the Mass in the sacristy, with the cameras, and to be projected on the LED screen,” Villegas said.

The CBCP president recounted the look on the Pope’s face: “From his facial expression, he said, ‘But why? The people are under the rain; I should be with them.’” 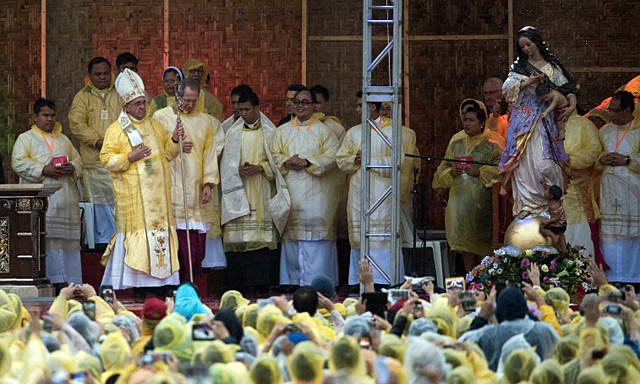 “It was a decision to celebrate the Mass in public where he could be seen, where he could feel what the people were feeling,” he added. (READ: ‘Pope in a Raincoat’ defines this papal visit)

In a media briefing on January 17, Manila Archbishop Luis Antonio Cardinal Tagle also recalled that after the Mass in Tacloban, and before his trip to Palo, Leyte, some people suggested to “let the Holy Father take the closed car.”

Tagle quoted the Pope as saying: “Ah, no, no, no, no, no. This is the reason why I am here. I am here to show solidarity, so if people had waited and had sacrificed under the heat of the sun, the winds, and also the rain, then why should the pastor not be with them?”

3. Pope ‘suffering’ during lunch in Leyte

Still in the media briefing on January 17, Tagle’s eyes welled up when he remembered “the face of the Holy Father” in a room at the Archbishop’s Residence in Palo, Leyte. 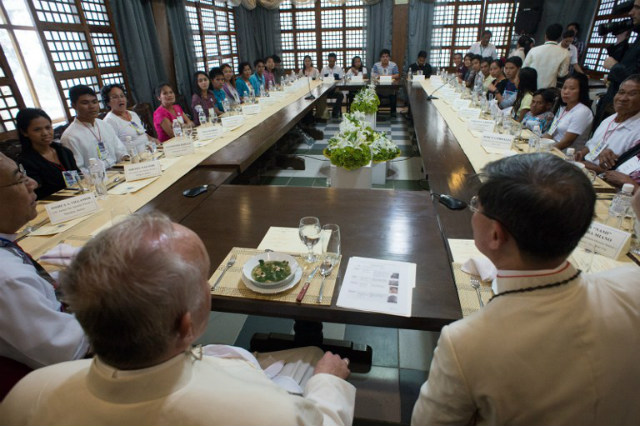 There, the Pope had lunch with 30 survivors of Yolanda and the 2013 magnitude-7.2 earthquake in the Visayas. Organizers gave him only 15 to 20 minutes there, instead of the original one or two hours, as he had to leave Leyte earlier to escape the brunt of Tropical Storm Amang (Mekkhala).

Tagle said the Pope first went around the room and greeted the disaster survivors there.

When the Pope had taken his seat, Tagle requested each of the survivors “to say a few words, especially about… the loss that they had experienced.” Beginning to cry, Tagle said, “I’ll never forget the face of the Holy Father, listening to each one.”

Tagle quoted one of the Filipinos saying: “I lost my parents and a brother. I lost everything.” “And then one woman said, ‘I lost my husband, I lost my son, and I lost 5 daughters.’ You could see the Holy Father just shaking his head, shaking his head.”

“And when I asked him, ‘Do you want to say a few words, before we go?’ he said, ‘But what can we say? What can we say?’ The silence of someone before this mystery of suffering,” the cardinal said.

In his interview with Rappler, Villegas added that the Pope “was not able to eat, because he chose to listen to the victims of Typhoon Yolanda.” 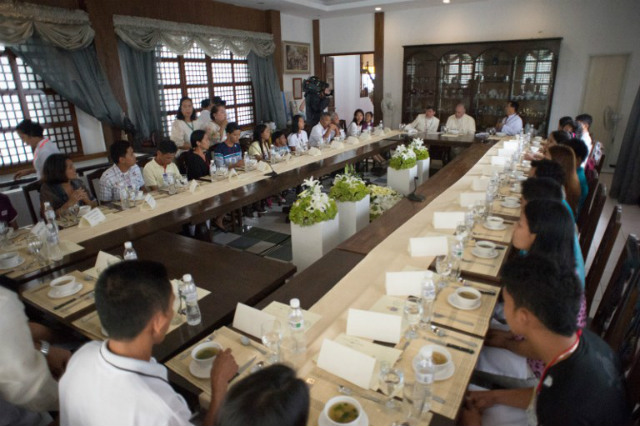 Villegas explained: “He chose to listen, because I think in his mind, partaking of the lunch would not give the victims full attention. So he wanted full attention because the moments, the minutes, that he was spending with them are very precious for the Pope. That is why he gave his 100% attention.”

On the plane back to Manila, the CBCP president said, the Pope “was very hungry.” The plane, however, “was not prepared for lunch” because they were supposed to leave for Manila by 4 pm. The plane “only had light snacks.”

“So for that day,” Villegas said, the Pope “only had potato chips for lunch. Without complaint. Mineral water, potato chips, a pack of peanuts, that was his lunch, because that was what was available.”

4. Pope stood while staff sat down

Aboard the papal plane, the Pope also surprised his fellow passengers.

Villegas said a high-ranking cardinal in the Vatican, if he needs to speak to one of his staff, “would most likely say to the flight attendant, ‘Can you call Cardinal So-and-So? Or can you call Doctor So-and-So? I wish to speak with him.’” 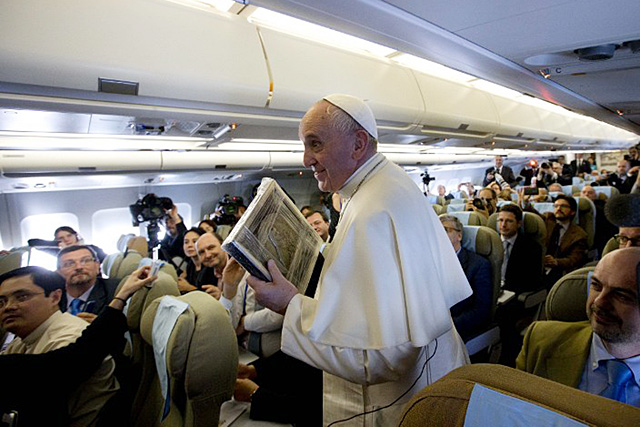 “But Pope Francis, wanting to speak with some of the lay staff in the papal plane, stood from his seat, went to the row where the staff was seated, and talked to him while he was standing, like one of the flight attendants,” Villegas said.

The archbishop explained, “Siya ‘yung lumapit, kasi siya ‘yung may kailangan daw.” (It was he who came close, because it was he who needed something.)

5. What Pope did after his Leyte trip

The Pope’s shortened trip to Leyte left Filipinos wondering: What did Francis do when he arrived in the Nunciature hours ahead of schedule?

A recent message by Pinto revealed what the Pope did. 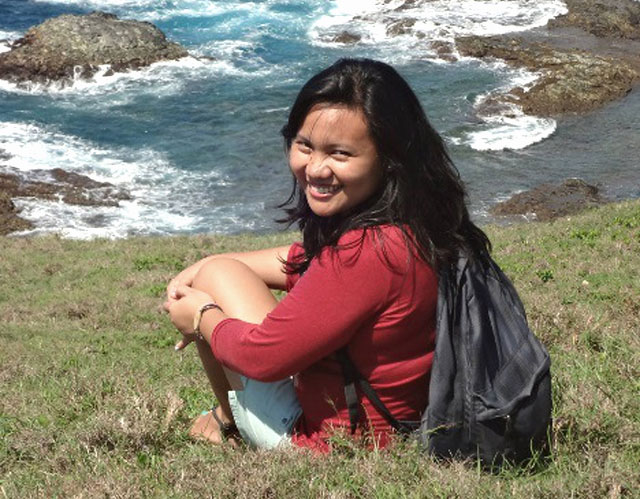 The Apostolic Nuncio wrote this message for the funeral Mass of Kristel Mae Padasas, 27, the Catholic relief worker who died in an accident after the Pope’s Mass in Tacloban.

Pinto said on January 27: “Upon his return from Tacloban in the afternoon of Saturday, January 17, Pope Francis spent a long time in prayer in the chapel of the Apostolic Nunciature on Taft Avenue.”

“In the Eucharistic presence of Jesus, he remembered Kristel Mae Padasas, innocent victim of the collapse of a structure, toppled by the wind; he thought of her parents Paolino and Judy and he invoked the love of Christ crucified on a family left without its only child.”

For Villegas, the Francis he saw behind the scenes is a proof of “authenticity.”

(Watch part of Villegas’ interview with Rappler below)

“And we should always remember that before God, we have nothing to boast,” the CBCP president added. “Before God, we are all nothing. And all the glories, all the praises that we see or that we receive, are all passing. In the end, it is only what God says about us that should matter.” – Rappler.com