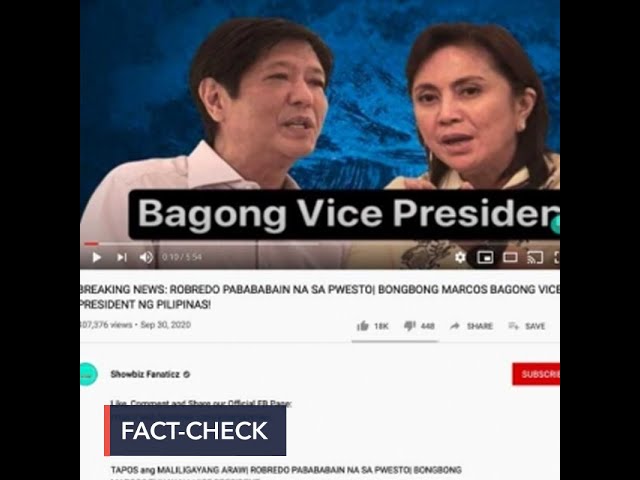 Former senator Bongbong Marcos is the new vice president of the Philippines. Incumbent Vice President Leni Robredo is set to be dismissed from office.

The YouTube video and the posts by the 3 pages were flagged by Claim Check, Facebook’s monitoring tool, for fact checkers to verify. As of writing, the YouTube video had 407,376 views while the videos on Facebook had 43,200 combined reactions and 8,600 comments.

Robredo is still the official Vice President of the Philippines as of October 7, 2020. The Manila Times article referred to as the source in the video did not say that Robredo will soon be unseated.

The Manila Times article, which can be found here, was only about the news that Justice Mario Victor Leonen is “finally acting” on the electoral protest filed by Marcos in 2016.

On September 29, the Supreme Court voted unanimously to move forward in the vice presidential electoral protest. The High Court, sitting as the Presidential Electoral Tribunal, also required the Commission on Elections to weigh in on the contested votes in Mindanao provinces of Lanao del Sur, Maguindanao, and Basilan. (READ: So what if the SC asked the Comelec to weigh in on the VP protest?)

This is not the first time that Rappler debunked a video posted by Showbiz Fanaticz. In September, Showbiz Fanaticz uploaded a false video that claimed that the Commission on Audit is running after Robredo after the commission supposedly reported P195 million worth of unutilized funds by the Office of the Vice President. It also falsely claimed that the SC affirmed that ABS-CBN is guilty of multiple charges. – Pauline Macaraeg/Rappler.com