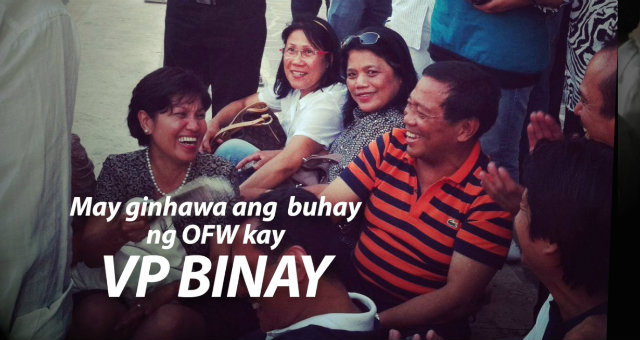 Beyond the legal front and possible money-laundering cases, the Binay camp admits the freeze order hits the opposition’s standard-bearer where it hurts: the campaign war chest.

“Everyone now will be afraid of giving money. If you were a businessman, your account will be frozen. Won’t you be afraid? What they are hitting here are the donors. One is to create the perception of corruption, but the second goal is to discourage donors,” Binay’s partymate Navotas Representative Tobias “Toby” Tiangco told Rappler.

With less than a year to go before the May 9, 2016 presidential polls, Binay’s team admits the 6-month freeze order has a “crippling effect” on plans to ensure that the former Makati mayor wins the seat of national power.

While decrying the order, a 10-month Senate inquiry that shows no signs of stopping, and a slew of lawsuits, the front runner in the presidential race continues to prepare for 2016 behind the scenes. The United Nationalist Alliance (UNA) is about to launch as Binay’s election vehicle, ads are on primetime TV, and on the ground, grassroots organization starts.

Can the Binay campaign take off despite the nagging corruption scandals? 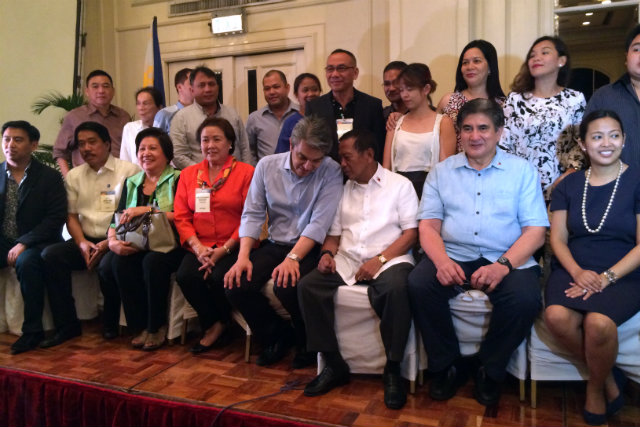 The immediate effect of the freeze order is to dry up initial funding for Binay’s campaign at a time politicians are deciding who’s running for what position.

“Funding will be coming some time in the latter part of the year when the candidates would have finalized their candidacies. If there’s a freeze order, what can we do? We have to support the Vice President now, even if we have to beg from our allies and supporters,” Bautista told Rappler.

There is a lot to spend on. UNA is set to formally launch after the Commission on Elections accredited it in February. Bautista said the event will likely come after the ruling Liberal Party (LP) announces its candidate in June.

“It’s going to be the first day of a month because UNA means first. It’s a big, big rally. If the budget would not prove sufficient, then we have to scale down, but what we have in mind is to project UNA as the front runner,” he said.

In March 2014, Binay abruptly left PDP-Laban, his party of 3 decades, over a feud with party president Senator Aquilino “Koko” Pimentel III. Pimentel opposed Binay’s decision to draft resigned Senator Juan Miguel Zubiri in the 2013 senatorial polls even after the senator accused Zubiri of cheating him in the 2007 elections.

Now, UNA is purely a Binay party. It is firming up its grassroots organization, conducting an inventory of supporters in 2010 and 2013. The party has 115 incumbent municipal mayors, 15 city mayors, 8 representatives, and 3 governors.

The group wants local coordinators to assist Binay when he visits their areas for official functions doubling as informal campaign stops. (READ: Will Binay resign from the Cabinet soon?)

UNA consolidates forces supporting Binay, including Makati’s sister cities, the Alpha Phi Omega fraternity, and the Boy Scouts of the Philippines – all dragged into the controversy in the Senate probe into Binay’s supposed shenanigans.

“I’m sure the congressmen are just maximizing the benefits they get from the administration. We will become bigger. Ang dali-daling magpadami ng tao ‘di ba (It’s so easy to increase our ranks),” Tiangco said. 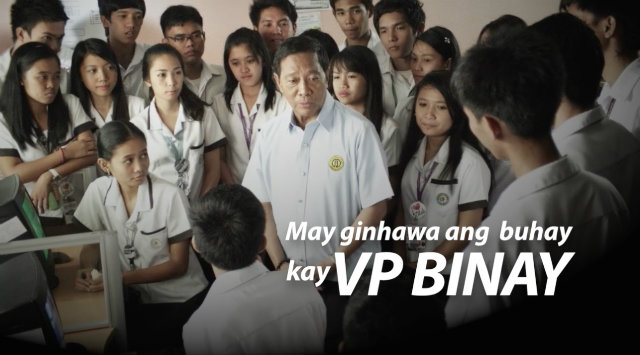 Tiangco said it is Binay’s “friends and supporters” who paid for his national ads that first ran on Friday, May 22, in time for the fieldwork of pollsters.

In the last quarter of 2014, Binay already ran ads in the provinces, but the new national commercials will air on primetime of ABS-CBN and GMA7, the two biggest TV networks.

‘We cannot veer away from Makati. Why will you vote for Binay? Because of education, free hospitalization, and the OFWs.’

From “Kay Binay gaganda ang buhay” (With Binay, life will improve) in 2010, the 2016 ads close with the modified tagline: “May ginhawa ang buhay kay VP Binay.” (Life is better with VP Binay.)

Ironically, the ads focus on Binay’s leadership of the financial capital, Makati, for 21 years – the subject of multiple government investigations over alleged overpricing, use of dummies, bid rigging, and ill-gotten wealth.

Still, Tiangco said the goal is to focus instead on the services Binay provided his constituents, and his rags-to-riches story.

“We cannot veer away from Makati. Why will you vote for Binay? Because of education, free hospitalization, and the OFWs. The reason his message is effective is he experienced it. He really experienced poverty. When he visits fire victims, there’s really a connection because his house was burned down as a child,” Tiangco said.

Asked who are the “friends and supporters” who paid for the ads, Tiangco said UNA does not want to disclose these for now. 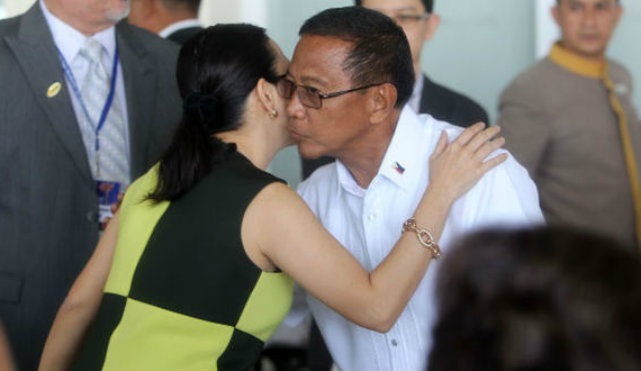 Even when UNA launches, there is no rush to choose a running mate, and a senatorial slate. The party is still in “exploratory talks.”

For running mate, Tiangco and Bautista said among the names under discussion are:

On possible senatorial bets, those on the tentative list are:

A search committee Tiangco heads will make the final decision. For now, the congressman said the objective is for Binay to focus on his campaign messages instead of talking politics.

After all, the Vice President was both criticized and rejected after mentioning possible running mates. Binay joked that LP’s Interior Secretary Mar Roxas could be his VP bet, prompting Roxas to adamantly say he will never ally with the corrupt. Senator Grace Poe also pointed to corruption allegations against Binay in response to Binay’s warning against inexperienced and incompetent candidates. Duterte said he, too, was not interested in running with Binay.

Last year, a peeved Binay infamously challenged his bitter critic Senator Antonio Trillanes IV to a public debate, only to back out at the last minute.

Political science professor Allen Surla of the De La Salle University (DLSU) said that Binay lacks discipline in messaging, and digs himself in deeper when he speaks. Surla pointed out a common observation reporters have.

“Pikon at mainit din iyan, and he starts blurting out things that should not be said. May ego ang mama. If you’re hitting on him, he starts proving his manhood. That’s why they call him ‘Rambotito.’ He’s got a Napoleon complex. He knows he’s on top of the race, and he could be the next president. Kailangang rendahan ang mama,” Surla told Rappler.

(He tends to get upset and hot-headed. He has an ego. He should be controlled.)

Surla believes the strategy of Binay’s advisers to keep him quiet on corruption allegations is effective. Binay’s oft-spoken line is to leave the issue to the courts.

“He is playing possum. The drawback is he is not defending himself. Some military strategists will say he is actually doing good in not talking. Binay is playing Fernando Poe: he gets beaten up and by some miracle, he will rise up and beat the bad guys. He’s playing the underdog. I don’t know if that’s the wisest of strategies, but Filipinos love underdogs,” said Surla, also external affairs director of DLSU’s College of Liberal Arts. 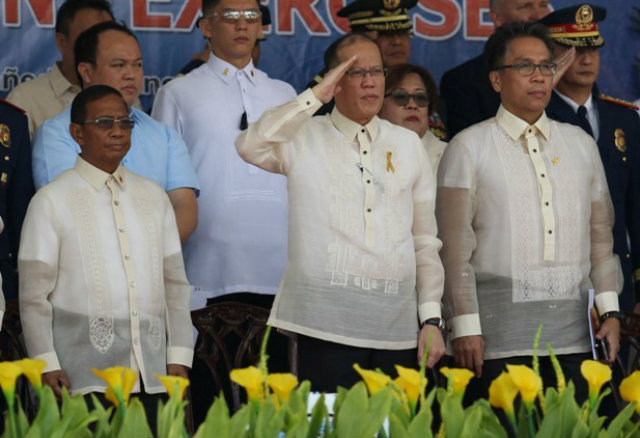 LP needs ‘something stronger’ vs Binay

‘If Binay were a hydra, they are shooting respective heads but a hydra will put out another. The administration will need to come out with something stronger.’

Yet Bautista said the group believes the Vice President already weathered the worst. “Ang problema nila kay Binay, ubos na. (Their problem with Binay is they are out of bullets.) What else can they raise against VP Binay? They have exhausted all of it in the [Senate] subcommittee hearings.”

Surla agreed that the Senate hearings against Binay are becoming repetitive and “boring.” He said if Binay’s critics really want him out, they should come up with a “more concerted strategy.”

“They are simply firing all at the same time. If Binay were a hydra, they are shooting respective heads but a hydra will put out another. The Senate, for example, does not have police powers to run after Binay. Binay has a battery of lawyers. These are just peashooters. They are not hitting him fatally enough. The administration will need to come out with something stronger,” said Surla.

To beat Binay, Surla said that the LP also needs to address an internal, basic question: who to field as standard-bearer. It remains unclear if the ruling party will go with Roxas despite his low survey numbers or endorse Poe even if she is a non-member.

“It’s funny. It’s one of those Greek tragedies. There is no one to field yet you are on the seat of power. There’s no understudy or the understudy is not appreciated by everyone else, so there is no chance for him to win,” Surla said.

“The antagonist is so strong, so evil, that you are unable to scratch his shield.” – Rappler.com