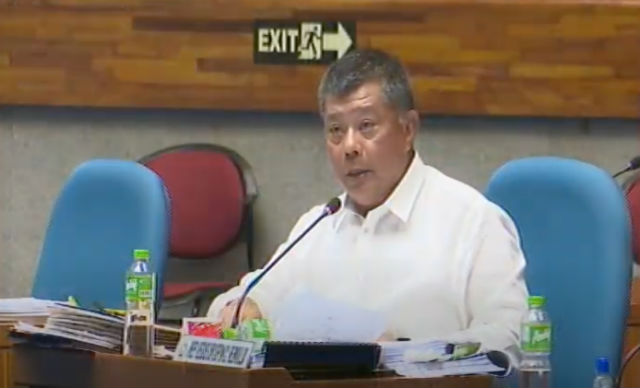 The Cavite 7th district congressman apologized for what he did at the start of the 8th House joint hearing on the ABS-CBN franchise issues on Monday, June 29 – but not before blaming “ABS-CBN people” for supposedly spreading the video on social media.

Remulla said an idea suddenly popped into his mind just before the national anthem played, and he had to jot it down before he forgot a question he intended to ask during the Monday hearing. (READ: ABS-CBN’s Big Dipper, Lingkod Kapamilya Foundation ‘not tax avoidance schemes’)

“Ang sa akin ho, I wrote the note – hindi ko ho excuse ’to – because something went into my mind for the questions I will ask. Ako’y humihingi ng dispensa sa ating mga kababayan,” Remulla said.

(What I’m saying is, I wrote the note – it’s not an excuse – because something went into my mind for the questions I will ask. I am asking for forgiveness from our countrymen.)

Remulla has been grilling ABS-CBN officials with nitty-gritty details that, for him, make the network liable for violating the Constitution and breaking the law.

Often forceful, if not hostile, during the hearings, Remulla usually interrupts the network’s executives and lawyers whenever they reply to his queries, sometimes even putting words into their mouths to establish the supposed guilt of ABS-CBN.

After his apology on Wednesday night, Remulla proceeded to do what he had been doing the past weeks – putting ABS-CBN executives on the hot seat. – Rappler.com