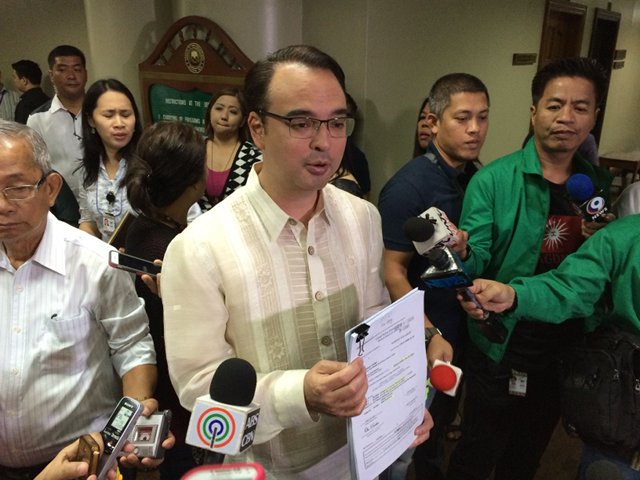 'LIKE ADULTERY.' Senator Alan Peter Cayetano holds up documents that, he says, establish the MILF's ties with Marwan.

MANILA, Philippines – Senator Alan Cayetano's term ends in 2019. But the last-term senator is already eyeing a higher elective post in 2016: the vice presidency.

The announcement of his candidacy in next year's elections confirms earlier reports he is indeed setting his sights higher.

A senator for 6 years now, Cayetano is already a familiar public figure. But there are some aspects of the senator's life that some people may not know about.

1. Political Family. Cayetano comes from a family that has been a regular member of Congress since 1998. In the Senate, he was the third in the family to become a member, following in the footsteps of his sister Pia (first elected in 2004) and their father Renato (senator from 1998 to 2003). Alan became a senator in 2007.

Currently, his wife serves as Taguig City mayor. His other brother, Ren, is a former Muntinlupa City councilor. 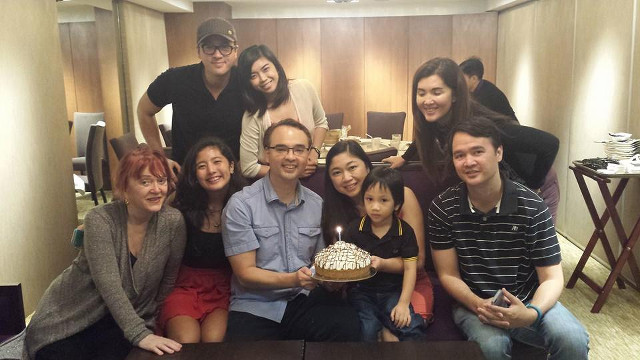 FAMILY. Alan Cayetano celebrates with his siblings and mother.

2. Local Politics. Before eyeing a Senate seat, Cayetano first dabbled in local politics – particularly in Taguig. He first served as councilor from 1992 to 1995, vice mayor in 1998, and congressman from 1998 to 2004.

Cayetano was supposed to have won the vice mayoral race in 1995, but didn't get to immediately sit as vice mayor due to a poll fraud case filed against him. The case proceedings took a long time, until a favorable decision was handed down in 1998. He became vice mayor officially with only 10 days left in his term.

"His frustrating and short-lived tenure as vice mayor in 1998 made him decide to seek a mandate to represent the people of Taguig as a Congressman for the Lone Congressional District of Taguig and Pateros," his Senate profile says.

3. Young Achiever. Cayetano claims to be "among the youngest, if not the youngest, in his political sphere." His Senate profile highlights the following:

He started so young in politics that he was, in fact, still in school in the early parts of his political career. He was in his junior year as a political science student in UP Diliman when he won as councilor, and went to the Ateneo Law School when he ran for vice mayor. 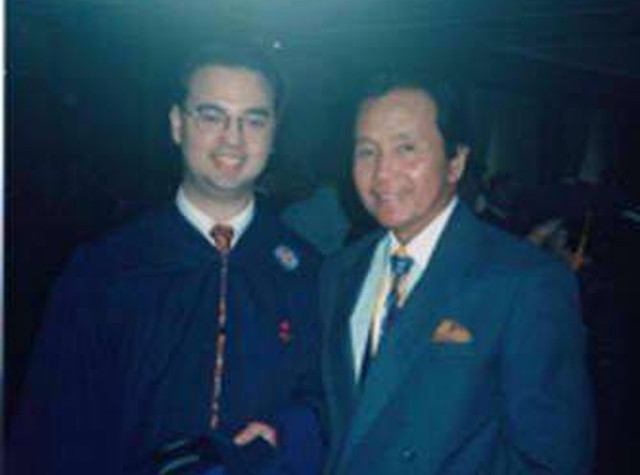 LAW SCHOOL. Cayetano was studying law school in Ateneo when he ran for vice mayor.

4. His Name. Senator Pia Cayetano – who is 4 years older than him – narrated in her blog: "Alan's namesake is an older gentleman who took in my father, Rene Cayetano, as an employee, which eventually led him to grad school in the University of Michigan. Peter is my grandfather's name." 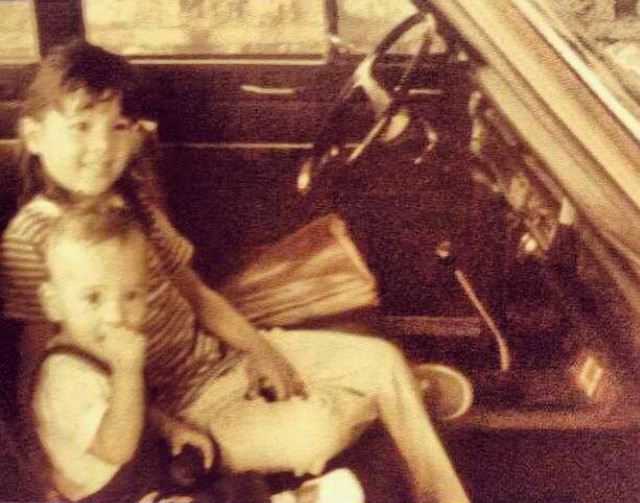 SIBLINGS. A young Pia Cayetano is photographed with a then toddler Alan Cayetano.

5. UP Diliman. The state university played an important role in his political career. Apart from having a senator as a father, it was in UP where he got his first taste of politics. Just a year after he entered UP Diliman in 1989 and took up political science, he ran for a post in the UP Student Council and won.

Fast forward to his Senate career, Cayetano currently takes pride in having 2 UP-related bills he authored passed into law: Republic Act 9500 (the University of the Philippines Charter Act) in 2008, and Republic Act 10648 (the Iskolar ng Bayan Act) in 2014.

He is said to have applied in UP Law School, but did not get accepted. He then entered Ateneo Law School and graduated in 1997.

5. Wealth. Based on the annual Statement of Assets, Liabilities and Net Worth (SALN) filed, Cayetano is among the "poorest" members of Senate. He ranked 20th among 24 senators in 2014 and 2013 with P23.32 million and P21.79 million net worth, respectively.

In his recent SALN, he declared a condominium unit in Batasan Hills, Quezon City – which he purchased in 2003 "by installment" – worth P1.4 million as his lone asset.

6. Baguio City. The city is very special for the couple Alan and Lani. In a Facebook post, Cayetano narrated: “Got to visit Baguio before summer ends. We have great memories of this place. Spent lots of summers with my brothers, sister and parents when we were young and also proposed and married Lani in our summer capital.”

Cayetano told GMA's Powerhouse that he immediately proposed to Lani without even asking her to be his girlfriend. He was turned down, as Lani wanted them to first enter into a relationship prior to marriage. She used to be a political affairs officer of his father. The two knew each other then, but Alan only began to approach Lani during Pia's senatorial candidacy.

The two remain childless, but Cayetano revealed they are already working on having a baby.

In another Facebook post, Cayetano said they try to attend every year the Panagbenga Festival in Baguio – which falls less than a month before their wedding anniversary. 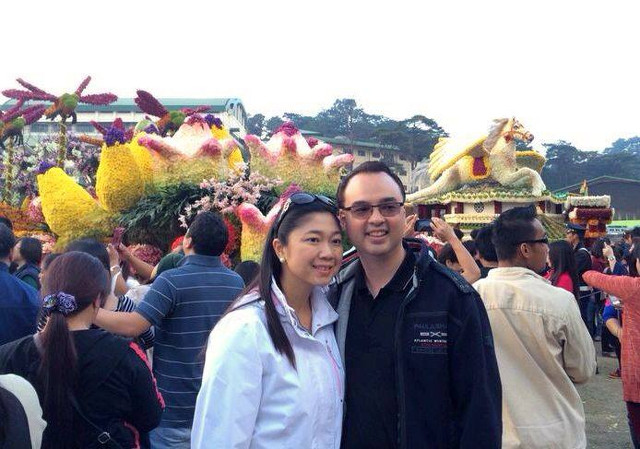 7. Nuisance Candidate. Remember Joselito "Peter" Cayetano? In the 2007 elections, Cayetano's first attempt to run as senator was almost derailed due to the candidacy of another Cayetano for the same position.

Alan, then known to be critical of the Arroyo administration, claimed that Joselito was asked to run in order to confuse voters. Back then, the manual method of voting was still in effect.

Alan landed 9th in the senatorial race, while Joselito lost.

8. MMK Episode. In time for Cayetano's 2013 candidacy, ABS-CBN's weekly drama Maalaala Mo Kaya aired on February 9 the episode "Letters", which centered on his life and his relationship with his father.

The episode showed how Cayetano's relationship with his strict father was strained when he was young, yet he remained an inspiration for him to pursue law and public service.

The elder Cayetano passed away in 2003, after suffering from stomach cancer while still a member of the Senate.

In a recap Rappler wrote after the episode was aired, we wrote: The message of the episode was clear: That the elder Cayetano's spirit and principles continue in his eldest son, Alan Peter. The episode ended with Alan Peter vowing to continue "what their father started," together with elder sister and fellow senator, Pia.

Actor Gerald Anderson played the role of Alan Cayetano in the said episode.

9. "TOPAK". Cayetano heads the Senate minority bloc, yet he is less harsh on President Benigno Aquino III compared to his counterparts in the House of Representatives.

It wasn't the case, however, when Aquino was then a presidential candidate. During the 2010 elections, Cayetano was the secretary-general of the Nacionalista Party, which fielded former senator Manuel Villar Jr in the presidential race.

Cayetano was the one who coined Topak – which stood then for trapos, oportunistas, and kamag-anaks (traditional politicians, opportunists, and relatives) – to refer to people in Aquino’s campaign. According to the book Ambition, Destiny, Victory, Topak referred to "a group that orchestrated the smear campaign against Villar" and was "supposedly composed of people once with the Arroyo goverment and who later became part of the Noynoy Aquino campaign." Topak is also slang for crazy.

10. Basketball. Evident in Cayetano's Facebook page are photos of him and his wife watching basketball games. Based on the photos, the two are avid supporters of the Gilas Pilipinas team. 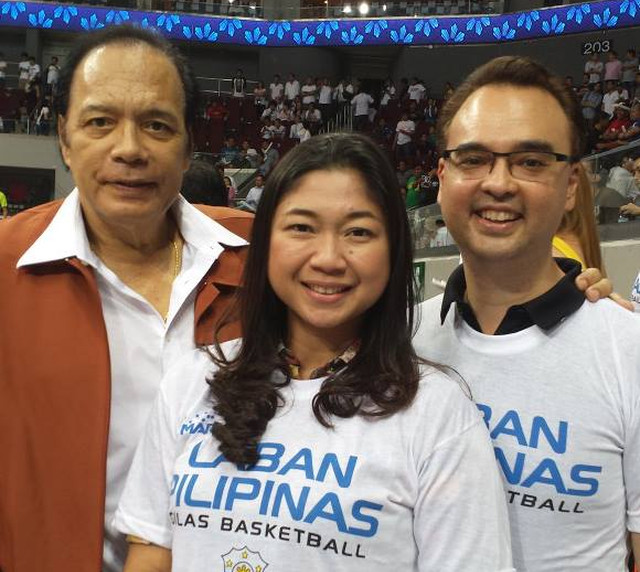 Does this mean that the senator is indeed into basketball? We're not quite sure. But here's a video showing Cayetano outdoing his younger brother Lino in the court.

He is Younger, Taller and Faster! But last night the kuya taught bunso a lesson! Posted by Alan Peter Cayetano on Tuesday, September 30, 2014