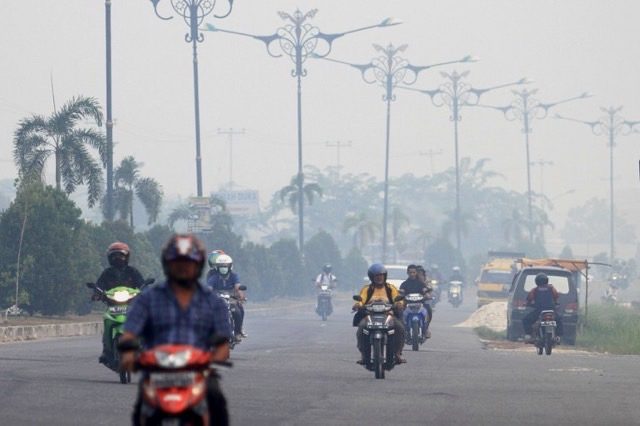 JAKARTA, Indonesia – Southeast Asian nations meeting Tuesday, July 28, to discuss the problem of haze that shrouds the region’s skies every year made little progress, as the number of smog-belching forest fires was on the rise in Indonesia.

Environment ministers from Indonesia, Singapore, Thailand, Brunei and Singapore met in Jakarta to discuss the issue.

The haze mostly comes from forest fires on Indonesia’s western island of Sumatra, many of which are deliberately lit to clear land for plantations.

Pressure to resolve the problem has increased since 2013 when Southeast Asia suffered its worst smog crisis for more than a decade, with haze levels hitting a record high in Singapore.

Nevertheless, collaborative efforts by the 10-member Association of Southeast Asian Nations (ASEAN) to resolve the problem have been slow, with Singapore’s calls for the adoption of a regional haze monitoring system making little headway.

The proposed system would use satellite data and maps of forest concessions to identify firms responsible for fires, and use this evidence to prosecute them.

But Indonesia and Malaysia, which is also home to palm oil plantations, have been reluctant to provide such maps.

There were no concrete developments at the two-day Jakarta meeting, prompting Singaporean Environment Minister Vivian Balakrishnan to lament “very slow” progress despite many meetings.

“The human, social and economic cost of haze in our part of the world has been too high, and been going on far too long,” he told reporters.

Singapore has passed legislation allowing authorities to fine companies that cause or contribute to haze, regardless of whether they have an office in the city-state. But officials say they still need evidence from the ground.

The number of fires on Sumatra rose steeply in recent days, with state-run Antara news agency reporting over 300 “hotspots” – either forest fires or areas likely soon to go up in flames – detected on the island at the weekend. – Rappler.com