How to survive climate change? Try this tabletop game 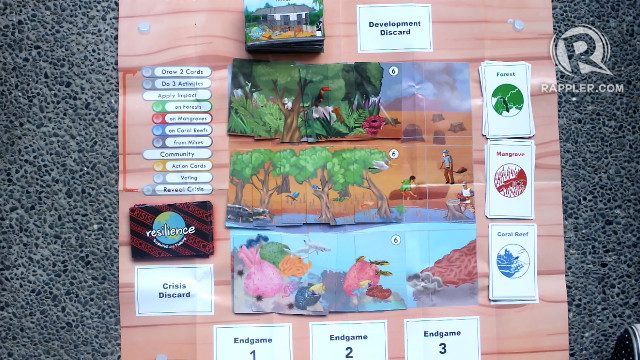 MANILA, Philippines – If you’re a seasoned Monopoly board game player, you are probably an expert at amassing wealth and property. But can you spur development in a community while ensuring it survives the next environmental disaster?

This is the challenge posed by a new game developed by the University of the Philippines’ Marine Science Institute (UP-MSI) and homegrown game company Balangay Entertainment, with funding from the Commission on Higher Education.

The game is called Resilience: Survive and Thrive. Ideal for 3 to 4 players ages 10 and up, it takes 15 to 45 minutes to play. Like most great games, it comes with sets of beautifully-illustrated cards and props, and a portable cardboard box to hold it all. But what makes Resilience unique is its ability to teach climate change impact in an entertaining and enjoyable way.

In the game, the players share natural resources: coral reefs, mangroves, and mountain forests in good condition. The goal of the game is for players to earn the highest number of “development points.” Earning such points requires “investments” that can either negatively or positively affect the shared natural resources.

The crux comes when it’s time to reveal the “crisis cards.” The condition of the natural resources, represented by Environment Cards, will determine the level of resilience of all players. If a crisis destroys all the development points, everyone loses and the game ends.

“It’s like an anti-Monopoly because you don’t want to develop in a way that is destructive,” said Talna Dela Cruz, a member of the UP-MSI team that developed the game.

Resilience: Survive and Thrive was made for students, but the game has reached other willing learners, to the delight of the game’s developers.

“At first they were like, ‘Since it’s part of the workshop, we’ll play.’ Then they really get into it so they say, ‘Oh no, we have to redo our LGU plan.’ So at least, there’s that impact,” she told Rappler.

David was surprised when UP’s School of Economics asked for the game to be played in their classes.

The Economics majors played the game “more aggressively,” said David. But when they were hit with a Super Typhoon card, they had to rethink their strategy.

“It’s good for them to play the game. They are our future developers, the future NEDA (National Economic and Development Authority). They will have this framework that you have to balance development,” said David.

Theme of the game: Tension

The overarching theme of the game is the tension between the need for social, human development, and the need to protect the environment. But the substance of the game lies in the intrinsic connection between both.

For instance, two types of investments – the Sustainable Investments and Commercial Investments – will give you a certain number of development points. A third set of investment cards are the Conservation Investment Cards. These don’t give you any development point, but it adds one Environment Card.

The rounds take an interesting twist when the players reach the Voting Phase. This phase allows each player to vote to close down a particular investment. Players can vote against a Commercial investment, even a Conservation Investment. The voting is supposed to mirror real-life community decisions.

“The players are like community leaders. We have one area, we share the resources. We decide together if one investment has to go,” explained Dela Cruz.

One type of crisis cards are the Extreme Weather Events: storm surge, strong waves, drought, typhoon, even a super typhoon.

These crisis cards force all players to discard their Investment Cards, and the development points that go with them.

How to make sure you discard the lowest number of Investment Cards? Your natural resources have to be in good condition. 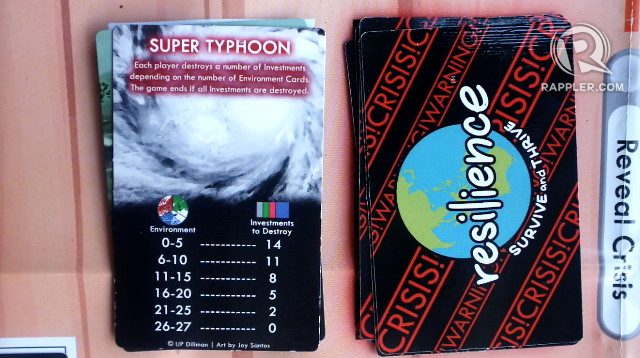 If all Investment Cards are destroyed by a crisis card, the game ends without anyone winning.

But there’s a second type of crisis card that can be revealed: the End Game Crisis cards.

Another thing is, the End Game Crisis has to be played every round, until the game ends. This means that in every round, an Environment Card has to be discarded and there is nothing any player can do about it. The game ends once 3 End Game Crisis cards are revealed. Then everyone totals how many development points they have. The one with the highest points wins.

But there’s more. Like real life, sustainable development is not only an individual’s gain, but the community’s.

The development points of all players and Environment Cards are added together. The number of points then point to a specific “epilogue” written in an Epilogue sheet.

There are 5 possible epilogues. The best epilogue is when the playing group has high development points and high environment cards as well.

This means the players “are able to live prosperously while maintaining a bountiful environment” that has made them resilient to climate change impacts.

The worst epilogue is when both development points and Environment Cards are low. This means the group’s natural resources are at high risk to climate change impacts and the community is impoverished. The game exhorts players to “start from scratch, without the help of the rich natural capital you once had. Rehabilitate the environment, and make sure that it is managed wisely this time around.”

The game is copyrighted to UP. By next year, the game is supposed to be commercially-available at bookstores and hobby and toy stores.

For now, UP-MSI is working with some target schools for the game to be played by their students.

The goal is to teach all generations of Filipinos that a prosperous community and a bountiful environment come hand-in-hand. The trick is to think ahead and play your cards right. – Rappler.com