MANILA, Philippines – “Sickening” smoke has been rising from the JG Summit Petrochemical Corporation plant in Batangas, threatening coastal villages and the nearby Verde Island Passage.

Photos on social media show thick clouds of black or grey smoke issuing from a column of flame. 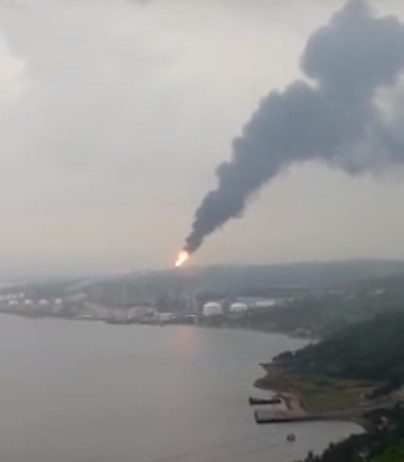 According to Batangas councilor Kristine Balmes, the flames and smoke have been observed for two weeks now.

Briton had passed by the chemical plant at 5 am from the island on his way to Batangas City. He spoke with Rappler by phone.

He also said the smell was foulest by the sea. Briton said it is likely chemicals had seeped into the water.

The JG Summit plant manufactures polyolefin products, or products made of a special type of plastic. The complex is located in the villages of Pinamukan Ibaba and Simlong on a coastline adjacent to the Verde Island Passage, one of the most biodiverse marine ecosystems in the world.

Marine biologists dub it the “center of the center of shorefish biodiversity.” It has been the subject of numerous scientific studies because of its richness. Only last June, American and Filipino scientists discovered 100 new species in the passage.

Despite its global importance, the Verde Island Passage is not protected by a national law, unlike other ecologically-important places like Mount Pulag National Park.

This has made it possible for facilities like the JG Summit plant to be built nearby. The company also has plans to put up a 600-megawatt coal-fired plant in the province, to the dismay of environmentalists.

They are worried about another threat: a proposed gold mine to be put up by MRL-Egerton Gold Philippines. – Rappler.com