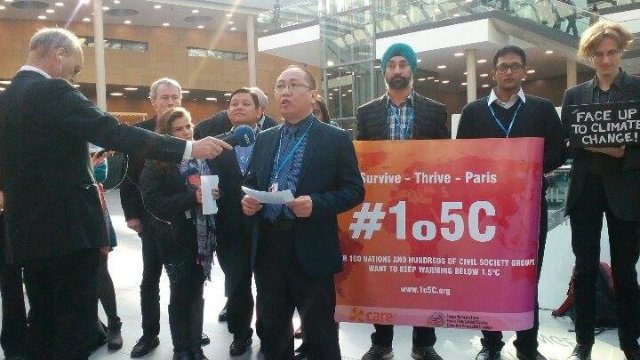 MANILA, Philippines – Twenty of the countries most vulnerable to climate change are meeting in Manila, Philippines, to forge a common position for the much-awaited United Nations (UN) climate summit in Paris, France, from November to December.

Called the Climate Vulnerable Forum (CVF), these 20 countries stand to lose the most if no ambitious climate deal is reached in Paris.

The CVF is composed of small island countries in the Pacific like Vanuatu, Timor Leste, and Maldives that are threatened by sea level rise and storms.

Members of the Climate Vulnerable Forum:

Also included are poor nations from Africa, Mediterranean, Latin America, and Asia. The CVF has been led by the Philippines since January 2015.

The Manila meeting is being held from November 9 to 11, a few weeks before the start of the Paris summit on November 30.

The 3rd meeting of the alliance, it seeks to formalize a common position for the 20 countries. Called the Manila-Paris Declaration, the position will give a stronger voice to these climate-threatened countries in a summit where over 190 countries will be represented.

“We commend the CVF countries for coming together to send an unequivocal message to the rest of the world to take the necessary collective action in affecting global climate action,” UN Resident Coordinator in the Philippines Ola Almgren said.

One of the defining positions of the CVF countries is that the global goal to combat climate change should be to limit warming not by 2°C but by 1.5°C – a more challenging goal.

The 20 countries are one in the belief that 2°C warming will still be catastrophic, especially for them, since these countries are located in parts of the globe where temperatures are hottest. Gunning for 1.5°C warming would be safer.

A report commissioned by the CVF shows that 98% of the 700,000 annual deaths due to climate change by 2030 will occur in developing nations.

“We need to limit warming to 1.5°C to be able to survive. We are in the position to demand because as developing nations, who are the least emitters of carbon, we bear the brunt of climate change,” said Philippine Senator Loren Legarda, who chairs the Senate committee on climate change.

The CVF launched an online campaign, “#1o5C,” to promote their call last October during the climate talks in Bonn, Germany. To maximize common experiences of global warming threats, the countries commit to sharing best practices and cooperating with one another to make their countries more prepared for climate change.

For instance, the CVF wants to establish the South-South Center of Excellence, a platform through which the 20 countries can share knowledge on successful climate policies.

To signify their commitment to climate finance, the CVF has formed a coalition of all finance ministers of its member countries. The group aims to encourage high-level dialogue within and among countries on how their governments can steer funding into climate adaptation programs.

The Manila-Paris Declaration will be presented during a high level event at the UN Climate Change Conference in Paris.

Aside from the final text of the declaration, the CVF countries will also finalize their coalition’s agenda and plans for the next two years.

Called the Climate Vulnerable Forum Road Map 2016-2018, it will also be presented during the Paris conference. – Rappler.com