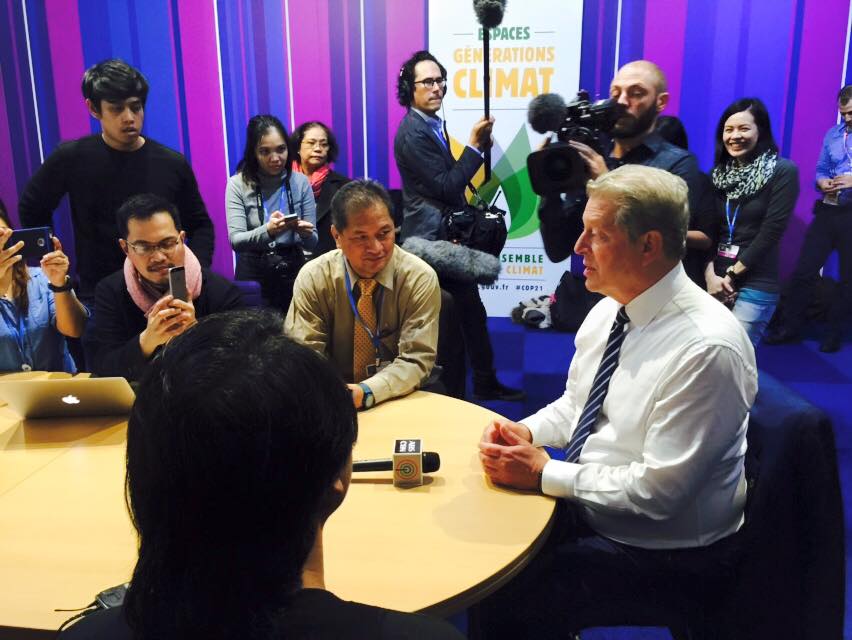 This line was repeatedly heard on TV during the disputed 2000 US presidential elections which Vice President Al Gore would eventually lose. Sixteen years later, Gore faces another fight shared by thousands who are now gathered here to push for a deal that seeks to hold global warming at bay.

The agreement is now up to a few countries, mainly big carbon emitters, including Gore’s government. Nearly 195 ministers are under pressure to come up with an ambitious and binding deal that will keep global warming below 2°C, the tipping point of climate change. (READ: EXPLAINER: How is the world’s climate action deal being negotiated?)

This time around, Gore, the founder and chairman of Climate Reality Project, is confident of winning the bigger battle – empowering communities for climate action.

“We are beginning to win this struggle,” Gore told Rappler on the sidelines of the climate conference, looking tired but not defeated. (READ: One more week to change the world: The Paris Promise)

Since the 2006 launch of his award-winning film An Inconvenient Truth, global awareness efforts on the climate crisis has gone a long way, Gore said.

In the film, Gore lent his voice to scientific opinion on global warming, warning about its catastrophic effects if the amount of man-made greenhouse gases is not significantly cut.

Gore said he supports an agreement that binds countries to the goal of keeping global warming below 1.5°C, a growing clamor in the conference.

He noted that the 2013 Yolanda (Haiyan) tragedy in the Philippines was a painful truth the world understood following his global campaign.

“When the suffering of the people of Tacloban was understood and felt by people around the world, it had a profound effect on the way people understood the impact of this stronger storm,” Gore said.

“I wish that scientific predictions that I repeated to the world from the scientists had been wrong. But it’s been clear for quite a long time that these predictions were correct, and when they began to manifest in these tragedies, it causes a deep sadness, of course, but even more than that, a stronger determination to do everyone possible to help organize people around the world that try to respond to effectively to prevent more tragedies like Yolanda in Tacloban.”

May hearts heal in Tacloban

Gore earlier met with the Filipino delegation at the COP21 or the 21st Conference of Parties of the UN Convention Framework on Climate Change.

Artist Ag Saño, a Yolanda survivor, told Gore about how a friend and most of his family members met their tragic fate in Tacloban.

Gore appeared to be moved by Saño’s story and the plight of other Yolanda survivors who are still recovering from the tragedy.

“Our hearts go out to the people of Tacloban,” Gore said, speaking for millions around the world who were saddened by the tragedy. “We are hoping and praying that constantly recovery will proceed. The losses can never be recovered but we hope the hearts can be healed.”

After the meeting, he received more than 800,000 signatures from the Climate Reality Project and Global Catholic Climate Movement in the Philippines.

The petition urges world leaders “to drastically cut carbon emissions to keep the global temperature rise below the dangerous 1.5°C threshold, and to aid the world’s poorest in coping with climate change impacts.”

Gore revealed he is set to visit the country in 2016 for climate leadership training. – Rappler.com