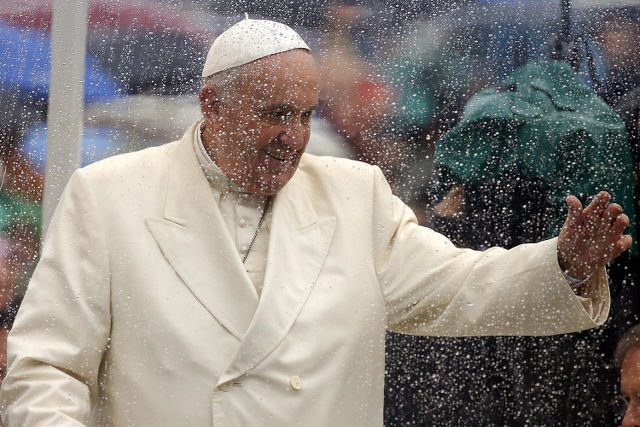 Facebook Twitter Copy URL
Copied
The Holy See adds its influential voice to the growing call for the safer and more difficult goal for the world's warming to be kept below 1.5°C

LE BOURGET, France – The Holy See has thrown its considerable moral weight behind the call of vulnerable nations for a 1.5°C warming cap, a more difficult goal for the UN climate pact now being finalized in Paris.

“Free the text. Take down the brackets. We support option two [in Article 2 of the Paris agreement],” said Monsignor Bernardito Auza, Apostolic Nuncio to the United Nations, during a bilateral meeting with Philippine officials on Thursday, December 10.

Auza was referring to a section of the draft UN climate agreement that calls for the world to “rapidly scale up global efforts to limit temperature increase to below 1.5°C.” (READ: Renowned climate scientist: 1.5°C goal ‘difficult but morally correct’)

The option is currently within brackets, meaning it is still up for discussion and is not assured a place in what will be the final UN climate deal.

Auza’s statement means the Vatican, along with 112 countries, now want the 1.5°C goal to be included in the Paris Agreement on Climate Change which countries are trying to ready by Friday, December 11 – supposed to be the last day of the UN summit (COP21).

The Vatican’s support can be directly attributed to efforts by the Philippine delegation, said delegation spokesman Tony La Viña in a previous interview.

Monsignor Auza, himself a Filipino archbishop, attended a bilateral meeting with senior officials of the Philippine delegation, including La Viña, during which the 1.5°C target was discussed. (READ: COP21: 4 crucial things PH wants from the UN climate deal)

The Philippines leads the Climate Vulnerable Forum (CVF), a group composed of 20 of the most climate-vulnerable countries in the world. The 1.5°C goal is the clarion call of these nations who stand to suffer the most even in a 2°C scenario.

“In these last hours, we are calling on all countries to stand in solidarity with billions of people alive and unborn, and to support the below 1.5°C global warming goal,” he added.

Bangladesh’s environment undersecretary Nurul Quadir said: “The world knows exactly that our countries already suffer huge losses of life, property, income and much much more at the minimal warming experienced to date. Going to 2°C would be unthinkable.”

The Vatican’s position is consistent with that of its head, Pope Francis.

The Pope, leader of the world’s 1.2 billion Catholics, is one of the most influential voices calling for a strong climate change agreement.

The religious leader has taken the time to visit typhoon-battered regions to bring comfort to victims of climate-linked disasters. – Rappler.com