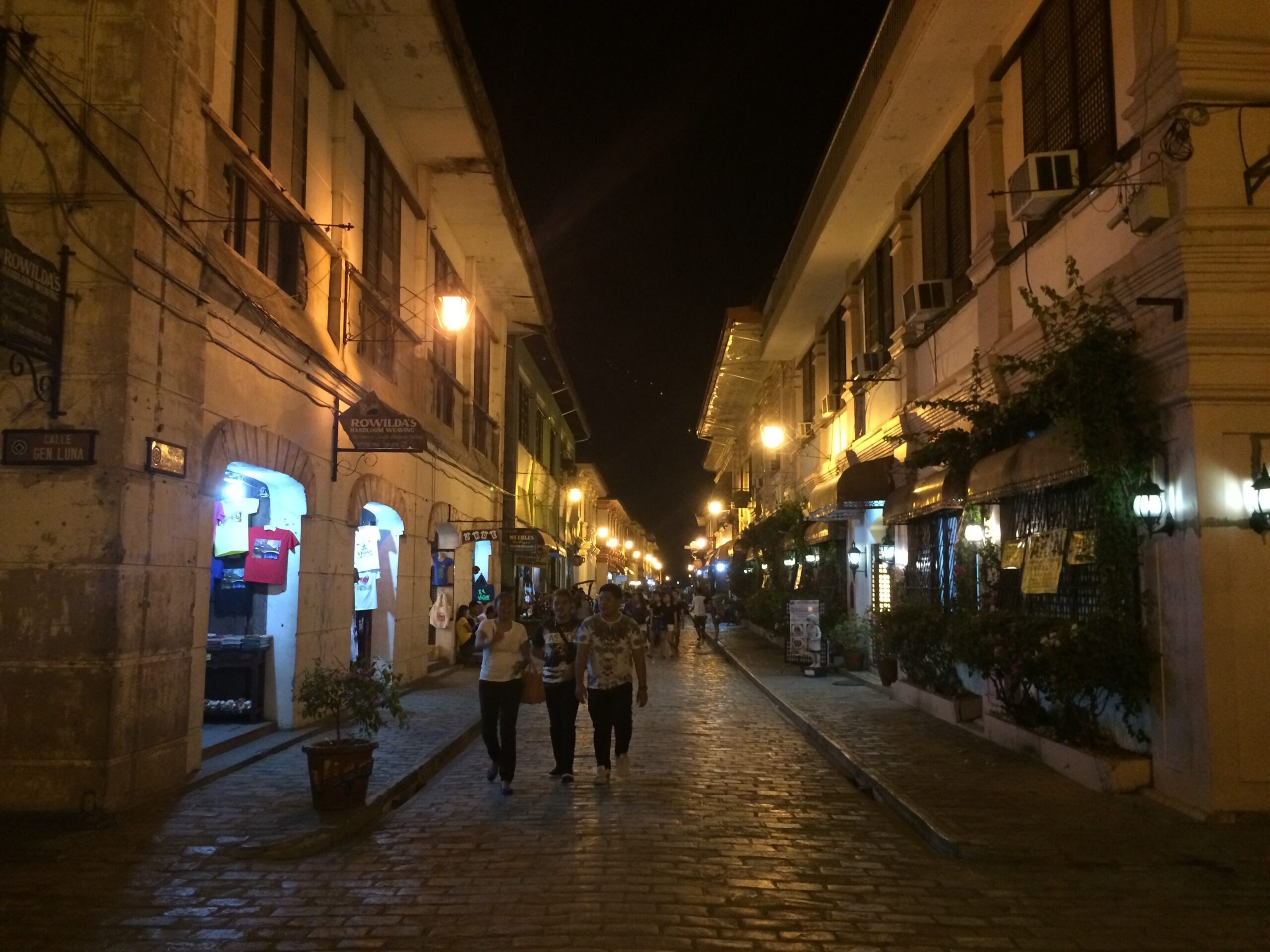 ILOCOS SUR, Philippines – When Vigan City in Ilocos Sur made it to the UNESCO World Heritage List in 1999, it was dubbed the “best-preserved example of a planned Spanish colonial town in Asia.”

Only, this planned town established in the 16th century did not expect motorized vehicles to ply its streets one day. The narrow roads are just right for pedestrians, and for calesas – a mode of transportation introduced in the Philippines by Spanish colonizers.

Fast forward to 2016, and much of the historic district is still dominated by the horse-drawn carriages.

In fact, in this part of the country, calesas – not jeepneys – are the king of the road. They can pass through one famous street that is off-limits to all other motorized vehicles: Calle Crisologo.

In 2014, Vigan was recognized by the national government as one of the 5 most walkable and bikeable cities in the Philippines, and the first in the country to completely pedestrianize one street, Calle Crisologo. For years, the street has been open only to pedestrians and calesas. City tourism officer Edgar dela Cruz said the pedestrianization helps in conserving and preserving Vigan’s heritage.

“We want to preserve the houses, the structures within the area, because that’s the very center of our heritage. The houses will be destroyed because of these vibrations from motorized vehicles,” Dela Cruz said in a mix of English and Filipino.

Save for residents of Calle Crisologo who can park their vehicles at night, no other motorized vehicle can enter the famous cobblestone street.

Keeping it this way ensures the street is also safe for tourists, according to Mayor Eva Marie Singson Medina.

Motorized vehicles are also prohibited from entering the streets surrounding Plaza Burgos during weekends and local festivals, such as Viva Vigan and Semana Santa.

The streets parallel to Calle Crisologo – Plaridel Street and V Delos Reyes Street – could also be pedestrianized “sooner or later,” said Dela Cruz. Medina noted, however, that closing too many streets to motorized vehicles can worsen traffic in the city.

What is sure, for now, is that the city already has a pending resolution with the Department of Public Works and Highways to also introduce cobblestone along V Delos Reyes, where many hotels are located.

But one sector is not complaining at all with the influx of tourists: the calesa drivers. Calesa: King of the road

Fernando Amano is one of the 139 registered calesa drivers in Vigan. He heads the Kalesa Association, which serves both locals and tourists in the city every day.

These drivers know the ins and outs of the historic city, and can bring you and 2 to 3 other friends around in a calesa ride for just P150 per hour. Amano said a calesa ride is still the best way to tour Vigan, despite the city’s walking tour, or other transport options, such as tricycles and bicycles.

(You can see old houses in Vigan. Calesas and old houses, that’s a combination, so it looks great. Just riding a calesa is historical in itself, and something you’d enjoy.)

Before the New7Wonders title, some calesa drivers would even fight with each other over who gets the passengers first.

Now, there’s not enough calesas to cater to the tourists flocking to the city. Amano said during really busy days, passengers – not calesas – do the waiting.

To help the calesa drivers, one project of the city government is to provide them extra horses.

(Our problem really is that horses get tired…. It’s not as hard for the calesa driver, who is seated, but he can’t drive beyond 8 hours because they pity the horses. But it’s better if there are alternate horses.)

Another project is giving poor calesa drivers their own horse-drawn carriages so they can bring home their daily earnings instead of giving part of it as boundary to a calesa owner.

Dela Cruz said preserving the country’s old mode of transportation is not only good for the city’s heritage, but also for the environment. (We have to keep the calesa because it shows us our history. We can learn a lot from it. And aside from that, it’s health, because if you ride a calesa, you won’t inhale smoke.)

Keeping Vigan free from air pollution is crucial if it intends to stay as a walkable city.

City environment officer Teddy Boy Corpuz said that, as of the last sampling by the Department of Environment and Natural Resources, Vigan’s air quality is still safe and of fair standard.

One effort of the city government to keep it this way is the conversion of thousands of tricycles from 2-stroke to 4-stroke engines.

“It made Vigan a more liveable city because there’s no pollution, plus it’s also good for the health of the people, and also the drivers themselves,” Medina said in a mix of English and Filipino.

The city has also stopped granting new tricycle franchise, since there are more than enough tricycles already in the city, in addition to many more from other municipalities that enter Vigan on a daily basis.

Despite its many efforts toward sustainable transportation, Vigan still faces the same problem as other developing cities: traffic.

While it’s nothing compared to the horrors of EDSA traffic, the volume of cars in Vigan can cause heavy traffic, especially during rush hours and along the city’s main thoroughfares, like Quezon Avenue.

But unlike other cities, Vigan cannot just expand its narrow roads to ease traffic. What it did is to manage its traffic well by implementing one-way traffic in at least 10 streets, from 7 am to 7 pm.

In certain roads like Quezon Avenue, tricycle drivers cannot just pick up passengers anywhere they like, because it can cause traffic congestion. Medina said they can unload passengers, but they can only pick up in their terminals.

Milgaros Alquiza, who heads the city’s public safety and disaster risk reduction and management office, said you cannot preserve the beauty of Vigan as a historic city if you don’t manage the traffic well and keep it safe for pedestrians.

To further ease traffic, the city government has agreed to lease land to a private developer who will put up multi-level parking buildings for private vehicles, as well as buses and jeepneys from other municipalities. This way, less roads will be used as parking spaces. The building for private vehicles can cater to tourists staying in hotels with no parking areas, said Medina. For day visitors, they can park their vehicles there and go around Vigan either by walking, or by riding bicycles, tricycles, and calesas.

Medina vowed parking rates will be reasonable, and any increase will have to go through the city council as a safeguard for clients.

Vigan knows its identity well – a heritage city that thrives on tourism and offers a throwback for anyone who wants to know what the Philippines was like in the past.

The city government considers sustainable transportation an important part of Vigan’s heritage conservation and preservation. But with the city gaining much popularity worldwide, concerns are slowly catching up.

“Our conservation program today [is] our tool for development, so nothing comes before that,” Medina explained, when asked how they come to terms with the challenges of urban development.

She added: “That was one of our main problems before, to change the mindset of the people, so it was difficult to tell them that Vigan is unique. That’s why people come to Vigan, right? Because of its rich culture, its rich history.”

“Now you take that out, and who will come to Vigan? So because of our conservation efforts, tourists are coming. Now [people are] earning from it.”

Medina’s personal wish is to see an electric tram in Vigan that can accommodate more tourists and move them easily from one place to another.

She said the city council has put in place an investment incentives code that gives tax breaks to pioneering endeavors, but whether an electric tram will eventually ply Calle Crisologo remains to be seen.

Vigan also has a very comprehensive transportation and traffic code, which lists down every effort to smoothen the flow of traffic within the city’s protected zone. Still, implementation is key.

At the end of the day, what the city government of Vigan wants is to make sure locals feel safe in the city they live in, and tourists make the most out of their short stay. – Rappler.com