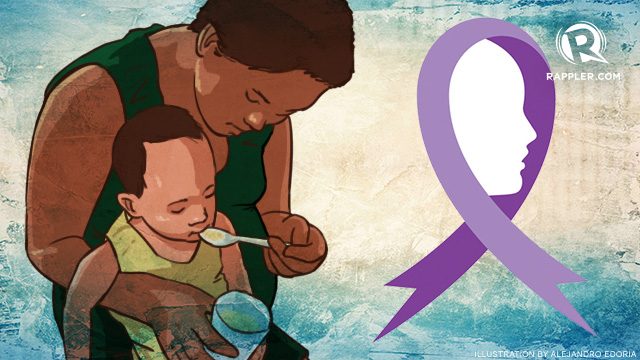 MANILA, Philippines – With childhood undernutrition on the rise, government officials are raising the alarm over teenage pregnancy and its effects on the health of both mother and child.

Cecilia Acuin, chief science research specialist at the Food and Nutrition Research Institute-Department of Science and Technology (FNRI-DOST), explained that teenage mothers are “vulnerable to all kinds of problems.”

The numbers are glaring: Acuin said about 25% of mothers are nutritionally-at-risk during pregnancy, but the figure increases to 40% for teenage mothers, because a teenager’s nutritional requirements are already very high.

“Once you start menstruating, you can get pregnant, but that doesn’t mean that you are ready to become a mother,” she said on Tuesday, August 30, at the launch of the latest Cost of Hunger in the Philippines report by non-governmental organization Save the Children.

She added: “When you’re pregnant, the nutrients get preferentially shunted to the baby, so if you’re a growing mom yourself, that means the cost of your own nutrition, so that’s why it would be really better if a teen girl waits until she is probably already working and socially stable before she starts having children because kawawa siya, kawawa rin ‘yung bata (the mother suffers, and the baby suffers too).”

Ella Naliponguit, director of the Department of Education‘s Health and Nutrition Center, said teenage parents are also not emotionally ready to raise a baby, which in turn affects the nutrition of the child.

“So do expect that teenage pregnancy is the reason [why] children of teenage pregnancies also would have a lot of issues when it comes to nutrition because the parents are not prepared,” she said in a mix of English and Filipino.

Acuin agreed, and added that teenage parents are probably not yet working or are working at entry-level jobs which do not pay a lot.

Acuin urged the government to fully implement the reproductive health (RH) law, considering the rising level of teenage pregnancies in the country.

The latest government report on the implementation of the RH law cited the 2013 National Demographic and Health Survey, which revealed that one in 10 adolescent girls 15 to 19 years old is either already a mother or pregnant with her first child.

Ned Olney, country director of Save the Children Philippines, also urged the government to invest in RH as part of its efforts to improve child nutrition in the country. (READ: Gov’t urged: Give undernutrition same attention as illegal drugs)

For him, it is “critically important” to reduce the number of teenage mothers in the country.

The recent Save the Children report revealed that the Philippines is losing at least P328 billion a year due to the impact of childhood stunting on education and workforce productivity.

Stunted growth – a sign of chronic malnutrition – could affect a child’s cognitive development, overall health, and even socio-economic conditions that carry on to adulthood. – Rappler.com