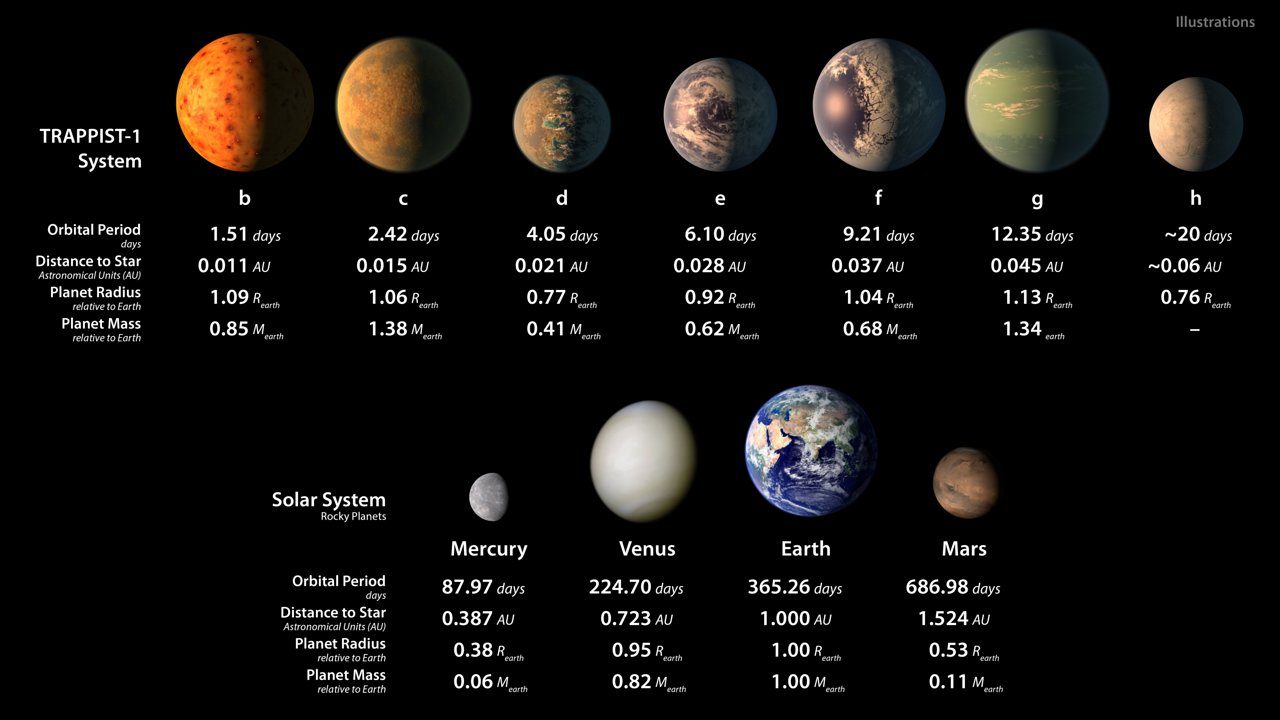 Facebook Twitter Copy URL
Copied
A nearby dwarf star is orbited by at least 7 exoplanets, a number of which have the potential to sustain life, scientists announce

MANILA, Philippines – A nearby dwarf star – just 40 light-years away from us – has been discovered to be orbited by at least 7 exoplanets, that have the potential to sustain life, scientists announced Wednesday, February 22 (early Thursday, February 23 in Manila).

The star in focus is TRAPPIST-1, a cool red dwarf, just 8% of the mass of our sun and just a bit bigger than Jupiter, the scientists said.

The planets are said to have sizes similar to Earth and Venus, according to researchers, in a paper published in the journal Nature.

“This is an amazing planetary system – not only because we have found so many planets, but because they are all surprisingly similar in size to the Earth,” said lead author Michael Gillon, a professor at the University of Liege in Belgium.

Compared to the distance between our Sun and its planets, the Trappist-1 family is very tightly bunched.

Indeed, the dwarf star and its 7 satellites – with orbits ranging from 1.5 to 12 days – would all fit comfortably in the distance between the Sun and its closest planet, Mercury.

If Earth were that close to the Sun, it would be a hellish ball of fire.

But because Trappist-1 emits far less radiation, temperatures on its planets – depending on the atmosphere – could be between zero and 100 degrees Celsius (32 and 212 degrees Fahrenheit), the scientists said.

Gillon and his team were able to figure out the presence of these planets through observations of events known as transits – when the light of a star dims a bit when an object passes in front of it.

The astronomers said that the periodic dips in the light they observed on TRAPPIST-1 indicated that there were objects passing in front of it, as viewed from our vantage point here on Earth.

From this, the researchers were able to “infer information about their sizes, compositions, and orbits,” the European Southern Observatory said.

Gillon and his team have started to analyze the chemical make-up of the atmospheres.

“There is at least one combination of molecules, if present with relative abundance, that would tell us there is life, with 99% confidence,” said Gillon.

A certain mix of methane, oxygen or ozone, and carbon dioxide, for example, could almost certainly come only from biological sources.

“But except for detecting a message from beyond our solar system from intelligence out there, we will never be 100% sure,” he added.

The discovery adds to growing evidence that our home galaxy, the Milky Way, may be populated with tens of billions of worlds not unlike our own – far more than previously suspected.

“We have made a crucial step towards finding life out there,” said co-author Amaury Triaud, a scientist at the University of Cambridge.

“Up to now, I don’t think we have had the right planets to find out,” he said in a press briefing.”Now we have the right target.” Remarkably, professional stargazers may simply have been looking in the wrong place.

“The great idea of this approach was to study planets around the smallest stars of the galaxy, and close to us,” said Gillon.

“That is something nobody did before us – most astronomers were focused on stars like our Sun,” he told journalists ahead of publication.

The first exoplanet was detected in 1995, but the number has exploded in the last few years. A recent statistical study estimated that there are a trillion in our galaxy alone.

Prior to this announcement, according to a NASA tally, there are 3,374 known exoplanets. Of those, 1,248 are so-called ice giants, 990 are gas giants, and 775 are “super Earths” with masses many times higher than the rock we call home.

The closest exoplanet discovered so far is located in Proxima Centauri, the star closest to our own sun. Exoplanet Proxima b’s discovery was announced just last year, and it is seen by experts to have potential to support life. – with reports from KD Suarez and Agence France-Presse / Rappler.com