Dec 17, 2017 8:54 AM PHT
Agence France-Presse
Facebook Twitter Copy URL
Copied
Five blind or visually impaired women have been specially trained to use their fingertips to detect breast cancer, one of Colombia's biggest killers 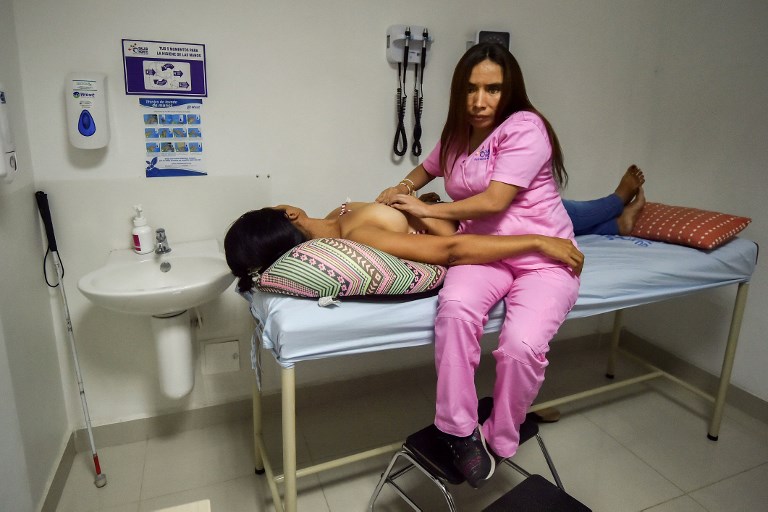 CALI, Colombia – Leidy Garcia awoke one morning in 2011 to discover she could no longer see. By then, Francia Papamija was already blind.

Disease swept away one sense but sharpened another, and their heightened sense of touch has become a valuable weapon in Colombia’s fight against breast cancer.

Garcia and Papamija are two of 5 women who are blind or visually impaired who have been specially trained to use their fingertips to detect breast cancer, one of Colombia’s biggest killers.

The disease is responsible for 2,500 deaths annually in Colombia, where 7,000 new cases are detected each year in a country where sophisticated detection equipment is rare.

They are among the latest practitioners to use a method made popular a decade ago by German doctor Frank Hoffman, who noted that the blind have an innate facility to detect nodules – groupings of cells – which may be the first signs of the disease.

“People with visual impairment have an increased sensitivity,” said Luis Alberto Olave, a surgeon and coordinator of the Hands Save Lives project at Cali’s San Juan de Dios hospital.

“There is a greater sense of touch and greater discrimination of the elements.”

Hoffman’s method was tested in Germany and Austria and was brought to South America with support from Latin American bank CAF.

Five women between the ages of 25 and 35, free of vascular or neurological problems that could impede their sensitivity, were chosen. After training, they graduated as tactile examining assistants.

Since then, they have evaluated more than 900 patients, their fight against cancer a simultaneous battle against discrimination.

“We are breaking a paradigm where people believe that because we have a disability, we cannot think or do things for ourselves,” said Papamija, 35, who lost her sight at age seven when she suffered a detached retina.

At the hospital, physicians found that checks carried out by the blind auxiliary assistants had “better” results than those with the regular evaluation.

“The clinical examination performed by them is a more elaborate examination and requires more time,” Olave told AFP.

“This generated in our patients a sense of well-being and comfort that they did not find was the case with a doctor using traditional methods.”

While clinical trials show that a woman performing self-examination can detect masses of between 15-20 millimeters and a doctor can find one of 10 millimeters, the blind can find nodules as small as eight millimeters.

Regular mammograms are widely available in the developed world and recommended for women over the age of 40, but such services are not widely available in Colombia where sophisticated medical facilities are relatively rare, making the Cali hospital’s “hands on” approach all the more vital.

“In developing countries, where we have certain limitations in technology to diagnose breast cancer, manual examination continues to be of great importance,” said Olave.

Garcia went almost totally blind six years ago after suffering a cerebral thrombosis, a trauma which forced her to cut short her engineering studies.

“People who see well are very visual – that is, they let themselves be guided by what they see. I locate myself a lot by touching and hearing,” the 26-year-old said.

Garcia palpates patient’s breasts for cysts or lumps, highlighting possible nodules by marking them with yellow and red tape.

When a lump is detected, she notifies a doctor who then orders tests to rule out or confirm the presence of cancerous tissue. Examinations last up to 45 minutes, while the traditional ones are usually completed inside 10 minutes.

Papamija explained it “can be a bit difficult” when she has to explain to a patient that she has found a “complex” lump.

Both women agree that patients react generally in two ways: curiosity or distrust. Some fall silent, others talk out their personal problems.

“You have a precision in your touch, the truth is that I’m terrified,” said a 42-year-old shop assistant after being examined by Papamija.

“They found something, but the doctor said it was just an inflamed ganglion,” added the mother-of-two. According to Olave, of every 100 nodules detected in the examinations, only about 10 turn out to be malignant.

Before becoming tactile medical auxiliaries, Garcia and Papamija had no work, like 62 percent of Colombia’s half-million visually impaired people, out of a population of 48 million. The figure is seven times higher than the Colombian employment rate, according to the National Institute of the Blind.

“This fell out of the sky to me,” said Garcia.

Olave believes the work is an important outlet for employing the visually impaired, and is getting ready to launch a new intake of medical auxiliaries in 2018. – Rappler.com