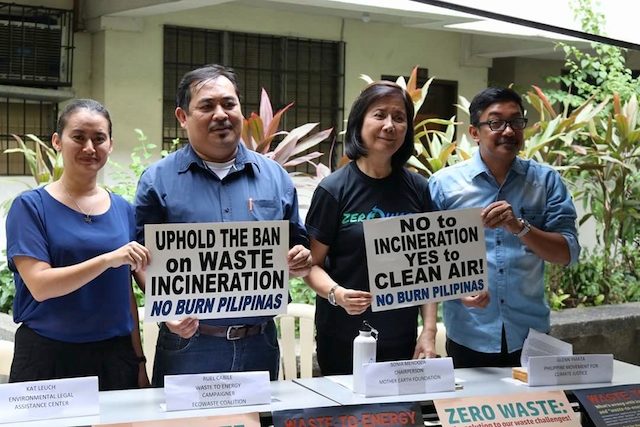 PUERTO PRINCESA, Philippines – Coalition No Burn Pilipinas (NBP) recently took a swipe at the Puerto Princesa City government for not doing “any basic homework on gasification” before signing a waste-to-energy (WTE) deal with a private firm.

In a statement sent to Rappler on Wednesday, April 25, Lea Guerrero, clean energy campaigner of Global Alliance for Incinerator Alternatives, emphasized the need for the City government to carefully study the WTE project.

“Unfortunately, it seems that the Puerto Princesa City’s local government hasn’t done any basic homework on gasification and so-called ‘waste-to-energy’ plants before they entered into a multibillion-peso deal,” Guerrero said.

Pedrosa argued the thermal gasification does not violate Philippine laws as he claimed this technology is not classified as incineration, which is banned under Republic Act 8749 or the Clean Air Act and RA 9003 or the Ecological Solid Waste Management Act for causing environmental health hazards.

The city official even downplayed the current law providing for waste segregation and achieving a zero-waste status in communities as “too good to be true.”

For NBP, the city government seems to have been “gravely misled,” as its expectations about the facility are “not supported by reality and actual experience of other cities and municipalities in other parts of the world.”

“We seriously doubt whether Puerto Princesa will realize any financial gains from this project. They will very likely end up heavily in debt should they pursue this project,” Guerrero said.

The coalition, meanwhile, provides the following key points about gasification:

NBP said it is alarmed by Pedrosa’s “apparent lack of understanding” about the basics of waste management, particularly his belief that “segregation under solid waste management law was rendered obsolete” by gasification.

“Any basic approach to waste – particularly municipal solid waste – starts with segregation. In fact, no waste expert in their right mind will tell anyone not to segregate because knowing waste composition and characteristics is the basis for all efficient and sound waste and resource management,” she explained.

NBP, a nationwide alliance of around 50 civil society groups, earlier slammed the Puerto Princesa City WTE project, claiming it violates Philippine laws and that the developer has no track record in undertaking such a project. (READ: Green groups: Scrap Puerto Princesa waste-to-energy project)

The coalition urged the city government to “back out” from what they called a “highly dubious project,” and to “pursue a zero waste approach to waste management,” as mandated to local government units under RA 9003.

“Waste reduction and recycling help improve overall health by decreasing exposures to hazardous materials and prevent pollutants from contaminating the environment,” he said.

Besides being the “cheapest way” to reduce solid waste, Cabili said recycling and composting practices as part of zero waste approach also “create 10 to 20 times job compare to incinerators.”

Worldwide, hundreds of cities and municipalities, including San Fernando City, are successfully pursuing the zero waste approach, which is not only sustainable but also equates to savings for the local government. (READ: Garbage law impossible to implement? Look at San Fernando)

Guerrero said: “As the world is shifting towards a sustainable circular economy which has zero waste approaches at its core, Puerto Princesa risks being left behind with an outdated, economically risky and harmful facility that runs counter to Palawan Province’s efforts toward environmental protection. – Rappler.com