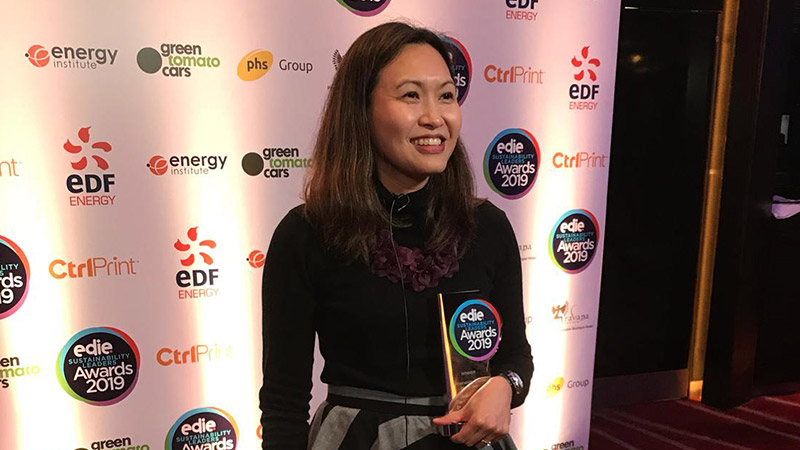 HONG KONG – There is a Filipino champion of nature being celebrated around the world today.

Earlier this month, Lao won edie’s Sustainability Leader of the Year Award, besting hundreds of top practitioners and nominees around the world at a prestigious awards ceremony in London, England. Leaders from IKEA, Landsec, Heathrow Airport, and PepsiCo were also recognized.

Lao is most often the highest ranking Filipino in the global companies, but more importantly, she quietly works daily to effect positive change from within.

She cannot escape the recognition though, as she received last February 6 what is considered the Oscars for global sustainability.

It was a historic win, as she became the first Filipino and Asian to win the prestigious award. She raised the flag of the Philippines and showed the ability of Asians to implement and execute best practices in saving the Earth, and the people who rely on nature.

Lao, who has mentored fellow young global Filipinos at the PH Time Is Now conferences in New York, has pioneered many sustainability initiatives. Forbes listed her as one of the top women sustainability leaders in the world, while the World Economic Forum also recognized her among the recipients of Women of the Decade Award 2018 in The Hague, Netherlands.

The prestigious 2019 edie Award noted that Lao’s leadership in sustainability has been followed by different industries in seafood, plastics and carbon trading, and in the luxury sector which is not traditionally focused on sustainability. This shows her “ability to generate groundbreaking efforts on new issues in new contexts.”

In her trailblazing, Lao is proof that Filipinos don’t only excel in sports, song, or pageants – they can excel in math and science too.

That’s why at home, she teaches her kids 9-year-old Esther and 6-year-old Isaac how to code and reach for the stars. Her daughter is into programming, and her son is into planets. Both developed a love for reading and learning, and their curiosity knows no bounds.

This is why Lao and her husband Mike brings them to a wide array of sites, like the Great Barrier Reef in Australia, and the Science Museum in London. They also went to Whistler, Canada, where they saw and played with the mountain caps of snow.

During these visits, it’s the awareness of their possible depletion or extinction that sticks, while their ambitions build to infinity and beyond.

“We have to do something.” And indeed she does something, every day, to make lives and the human condition, and in effect the world, better.

After earning a Masters of Science in Environmental Change and Management at the Univeristy of Oxford, Lao lobbied for and effected positive change from within various large corporations headquartered in London, Washington DC, and Hong Kong.

In recognition of her academic and persuasive abilities to lead new practices and implement them globally, Lao was awarded the Pioneers for Change Fellowship Programme in the United Kingdom, and led one of Hong Kong’s successful green bonds listed in Fortune Magazine’s “Change the World List.”

‘Open doors for others’

She is a true change agent who digs deep into the root causes of environmental issues and shapes them into a story that is understandable and appreciated by key decision makers whose “yes” or “no” could mean a safer, more sustainable world.

“It’s often said that nature doesn’t need people and it’s people who need nature,” Lao said. “It’s imperative that we give nature the care it deserves because it gives us what we need to survive and thrive.”

Lao was selected from among hundreds of entries for the prestigious awards that recognize excellence across the spectrum of sustainable business.

“I didn’t get here on my own. Though I had grit and perseverance, it was through the bayanihan spirit – the support and inspiration of our fellowmen at home and around the world that got me here. I’m grateful for each one of them and hopeful that we all pave ways and open doors for others when and where we can help,” she added. – Rappler.com