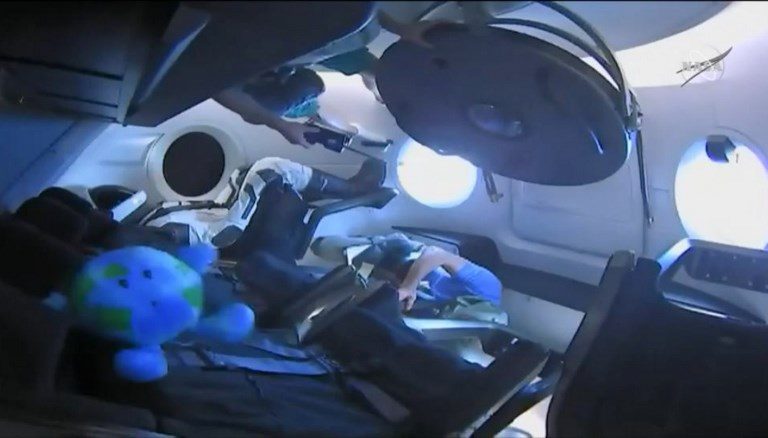 WASHINGTON, USA – The demonstration mission of SpaceX’s new Crew Dragon capsule successfully docked Sunday, March 3, on the International Space Station, passing a key test before it can begin taking US astronauts into space.

The docking of the capsule, which has only a dummy on board, was concluded at 1051 GMT, nearly 400 kilometers over the surface of the Earth, NASA and SpaceX confirmed during a live broadcast of the mission.

A little over two hours later, the space station’s 3 crew members – American Anne McClain, Canadian David Saint-Jacques and Russian Oleg Kononenko – opened the hatch of the space capsule and, for the first time, penetrated its interior in space.

There they found the dummy, Ripley, strapped to a seat, and an untethered plush toy in the form of the blue planet, which SpaceX had jokingly placed there as a “super high-tech zero-g indicator.”

“Welcome to the new era in spaceflight,” McClain said from inside Dragon.

Saint-Jacques tweeted about the experience monitoring Crew Dragon’s “first-ever approach and docking” to the space station, hailing it as “the dawn of a new era in human spaceflight!”

NASA chief Jim Bridenstine tweeted his congratulations on “this historic achievement,” which brings the United States a big step closer to its goal of again flying astronauts into space on American rockets.

NASA has relied on Russia to ferry its astronauts to the space station since the end of the US space shuttle program in 2011 after a 30-year run.

Contact appeared to be made very slowly, but in actuality both spacecraft were orbiting the Earth at more than 27,000 kilometers per hour.

From blast-off at the Kennedy Space Center in Florida on Saturday to contact Sunday, the flight took 27 hours. Dragon will detach itself from the space station next Friday, March 8, and splash down in the Atlantic Ocean, its descent slowed by four parachutes.

The mission is a dress rehearsal, without anyone on board, for Dragon’s first manned mission, which should take place this year. The test run sought to demonstrate that the vehicle is reliable and safe, so that NASA can resume manned flights from US soil this year.

Founded by billionaire Elon Musk, SpaceX has made the trip to the ISS a dozen times since 2012, but only to bring cargo to the station.

In 2014, the US space agency awarded contracts to SpaceX and Boeing to take over the task of ferrying astronauts to the space station. In SpaceX’s case, NASA has agreed to pay $2.6 billion for six round trips.

The switch from NASA owning spacecraft to paying private firms for a service was initiated under former president Barack Obama – but due to development delays, has come to fruition under US President Donald Trump.

Return to the Moon

Since 2017, one of NASA’s official missions has been to return to the Moon. Congress has been generous with the space agency, providing overall funding of $21.5 billion in the 2019 budget.

Bridenstine has explained that NASA wants to reduce costs in low orbit to devote resources to getting back to the Moon and assembling a small space station in lunar orbit in the 2020s.

“As a country, we’re looking forward to being one customer of many customers, in a robust commercial marketplace in low Earth orbit, so that we can drive down costs and increase access in ways that historically have not been possible,” he said Saturday following Dragon’s launch.

But Musk has admitted that marketing travel in the Dragon capsule is not a priority – and he is more interested in distant exploration of the solar system.

At the post-launch press conference on Saturday, March 2, he reiterated his dream for a permanent Moon base – and sending people to Mars.

Musk has already locked in his first private customer to fly around the Moon: Japanese billionaire Yusaku Maezawa. But it won’t happen before 2023 at the earliest – with the rocket, far more powerful than that used for the Dragon mission, still in development. – Rappler.com