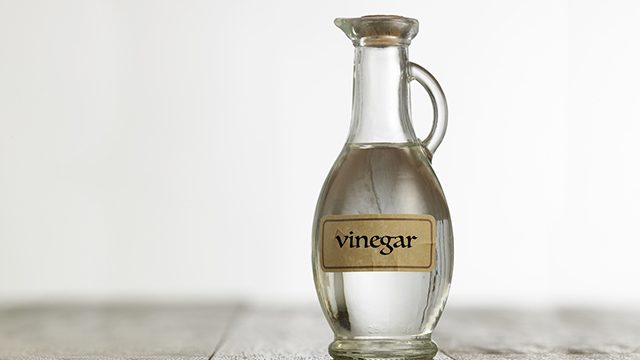 Facebook Twitter Copy URL
Copied
The Department of Health, however, prohibits the use of synthetic acetic acid in vinegar which it deems 'adulterated'

MANILA, Philippines – Vinegar made from synthetic acetic acid has no adverse health effects, according to former University of the Philippines-Diliman Institute of Chemistry director Flerida Cariño.

On Monday, May 20, Cariño said, “[H]ealth-wise, as far as I know, there has never been any reason to think that acetic acid from synthetic sources or non-biogenic sources is carcinogenic or toxic compared to its biogenic counterparts.”

PNRI’s study, which began in the early 2000s, found that 15 out of 17 vinegar brands contain synthetic acetic acid. The study, however, did not disclose what these brands are and did not determine if there were any residues or contaminants found in these brands.

“Wala talagang data ‘nun, whatsoever (There is no data on that, whatsoever.) It is the contaminants that may have been present which [were] not analyzed, which is actually the problem,” Cariño said.

This should trigger further study and require looking at the presence of contaminants especially in vinegar made from synthetic acetic acid. Regulatory issues involving the proper labeling of vinegar also need assessment.

Cariño, a biochemist and toxicologist, pointed out that petroleum products or fermented crops also produce acetic acid and create the same chemical effects.

Cariño also serves as a consultant for a number of government agencies, including the Department of Agriculture, which called for a meeting to clear up the issue of “fake” vinegar.

According to PNRI, there are 2 types of acetic acid: food grade and industrial grade. Food grade acid will mean that the contaminants are already removed. | @rapperdotcom

(The FDA will undergo a quality evaluation to see if our vinegar standards need to be revised or amended.)

“Because when we looked at the international standards for vinegar, there wasn’t anything yet. This is still being discussed internationally,” Mamaril said in a mix of Filipino and English.

Under the Department of Health’s Administrative Order (AO) No. 123 series of 1970, however, vinegar has to come from a fermentation process. Any of the following can be fermented to make vinegar that follows Philippine standards:

Caramel can also be used for coloring without declaring it on the label, while flavoring has to be indicated on the vinegar’s label.

What the order does not allow, however, is the use of synthetic acetic acid in vinegar which “shall be deemed to be adulterated and its sale is hereby prohibited.”

Vinegar should also not contain foreign substances, drugs, sulfuric acid and other mineral acids, according to the AO.

FDA Regulation Officer IV Maria Theresa Cerbolles told Rappler that during their annual rounds of monitoring processed food products in the past, they had found a number of violators. – Rappler.com