The science behind the purple ube jam turning white 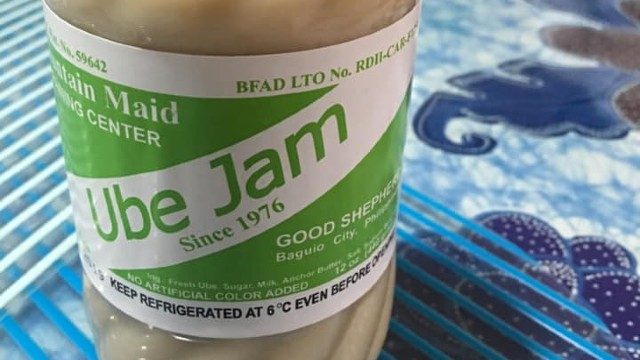 Facebook Twitter Copy URL
Copied
Data linking climate change specifically to ube production are scarce. But the indicators of the impact can be seen in some reports, such as the change in rainfall pattern as well as the mean temperature of the area.

“Climate emergency is real. Due to changing climate, our ube farmers are having difficulty growing ube. It has been our struggle in the recent years to find a stable supply. And in the past weeks there were none. Those of you who went to Baguio know this. Now our ube jam sports a new look. Yes it is Ube Jam. From white ube. Yes there is such thing. And it is the available supply at the moment… and yes it is just as good as the purple one,” the Good Shepherd said in its Facebook page.

Two things stood out from the post. First, that the farmers and the religious order behind Good Shepherd believe that climate change is to blame for the lack of stable supply of ube. Second, that Good Shepherd will be using a white variety of ube for the jam.

The colors of ube

Yam or Dioscorea alata is a type of vine that produces both aerial tubers and underground tubers. In the Philippines alone, there are several varieties of ube, depending on location. These ube are in different shades of purple and white. Some of the recommended varieties, according to the Department of Agriculture’s Bureau of Plant Industries, are the white with purplish flesh Basco Ubi, the purple Zambales Ubi, and the cream to white Leyte Ubi.

Another popular variety is Ubing Kinampay, or the “Queen of Philippine Yams,” known in the Visayas area, particularly in Bohol.

Ube grows in areas with temperature 15-35°C and annual rainfall of less than 1,000 mm distributed over 6 to 7 months. Ube is adapted to partially or fully shaded conditions, and it grows tubers best during shorter days, or less than 12-hour daylight.

Agriculture, in general, is severely impacted by climate change. An international organization, the International Food Policy Research Institute, has estimated that climate change will put “an additional 2 million people in the Philippines at risk of hunger by 2050 and cost about Php 145 billion annually over that time span” as it will affect food production in the country.

However, data linking climate change specifically to ube production are scarce. But the indicators of the impact can be seen in some reports, such as the change in rainfall pattern as well as the mean temperature of the area.

The Philippine Statistics Authority (PSA) showed that ube production in the Philippines continues to slow down, despite the growing demand, from 17,844 metric tons in 2011 to just 14,376 metric tons in 2017. PSA noted that the decline could be attributed to the early onset of rainfall, which affects the planting season of ube, particularly in Bohol, from 2011 to 2015. Interestingly, due to a local agricultural program supporting ube farmers, their yield grew from 400,000 kilos in 2018 to 600,000 kilos this year.

Meanwhile, a group of scientists tried to relate the possible effect of air temperature in Baguio to the shortage of ube. Geospatial Assessment and Modelling of Urban Heat Islands in Philippine Cities (Project GUHeat) is a research project funded by the Innovation Council (Department of Science and Technology’s Philippine Council for Industry, Energy, & Emerging Technology Research & Development) and implemented by the University of the Philippines Training Center for Applied Geodesy and Photogrammetry (UP TCAGP).

Project GUHeat is looking into the development of urban heat islands in various cities in the Philippines, like Quezon City, Baguio City, Cebu and Mandaue City, Iloilo City, Zamboanga City, and Davao City. The project also relates land surface temperature with environmental factors, including land use, land cover distribution, public health, energy and water consumption and vegetation growth (including crops) in these cities.

In a Facebook post, Project GUHeat stated, “In a temporal study conducted by Project GUHeat, the mean air temperature during March to May 1979 is only 21.3°C which is around 2 degrees lower than the one recorded in 2019 for the same months.”

Representatives from Project GUHeat told Rappler that, according to their references, as yams are sensitive to small changes in temperature and light and shading environment, having a higher mean air temperature from 1979 to 2019 could have mad it harder for ube farmers to grow purple yam. – Rappler.com