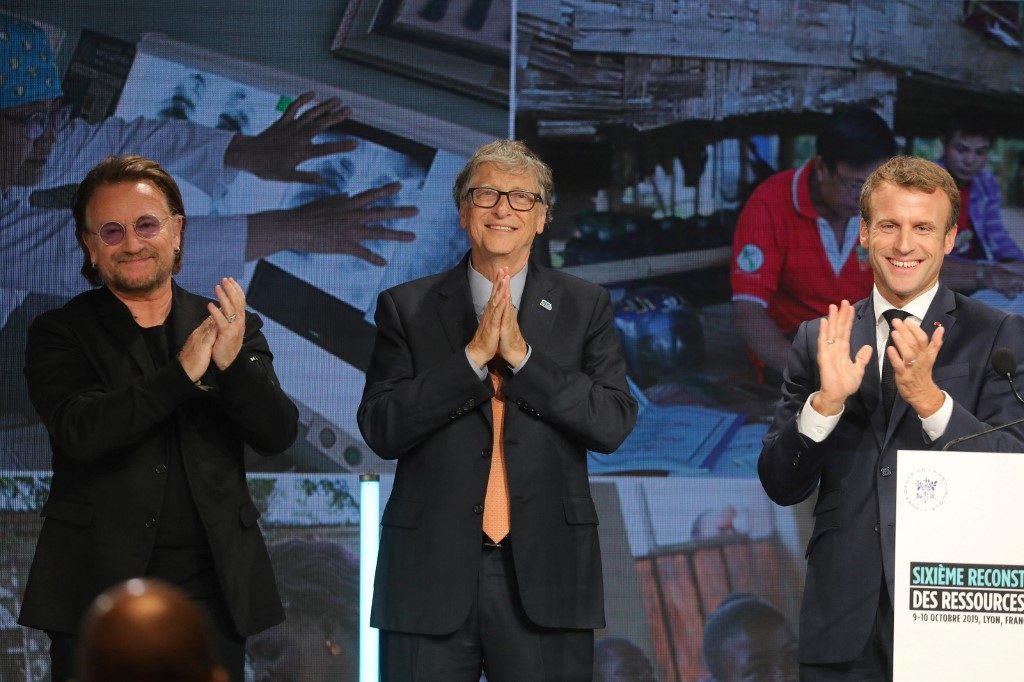 Facebook Twitter Copy URL
Copied
Promises for replenishment money are made at meeting in France of the Global Fund to Fight AIDS, Tuberculosis and Malaria

LYON, France – Governments, philanthropists and private firms were on course Thursday, October 10, to reach a target of $14 billion for a plan to save 16 million lives in the global fight against the epidemics of AIDS, tuberculosis and malaria, French President Emmanuel Macron said.

The money was promised at a replenishment meeting in Lyon, France, of the Global Fund to Fight AIDS, Tuberculosis and Malaria, at which Macron engaged in intense diplomacy to exhort countries to step up donations.

“These are not simply numbers, they are lives,” the French leader told delegates.

“The funds that are being asked of us are not… charity. It is a decision to invest against injustice,” he added, highlighting the disproportionate rate of infection and deaths from the 3 diseases in poor countries and among women and girls.

Macron said that a total of $13.92 billion was pledged after he spent the morning contacting heads of state and government – from the emir of Qatar to the Armenian premier – in a bid to rally more funds.

That included an additional $60 million made available by France, an amount Microsoft founder and philanthropist Bill Gates then matched.

Macron then vowed to gather another $100 million in pledges by December to reach the target, notably urging a bigger contribution from Japan.

The fund’s chief executive Peter Sands said this meant a total of $14.02 billion had effectively been pledged, including the additional $100 million promised by Macron.

NGOs insist that even more is needed – as much as $18 billion.

Several delegates had expressed doubts that such a large sum could be generated as the focus switches away from diseases largely affecting poor countries, to other global problems.

“What we want to do is to make AIDS, tuberculosis and malaria disappear from the face of the Earth,” Macron told delegates.

He complained that the resolve to fight the deadly trio has weakened in rich countries because fewer of their own are dying and treatment, particularly for HIV, is now readily available.

The two-day meeting in Lyon was the sixth to replenish the fund since it was set up in 2002, with prominent supporters Gates and U2 lead singer Bono in attendance alongside a number of African heads of state.

“Where you live should not decide whether you live,” the singer told delegates.

“For 14 million people with AIDS who can’t get the medication to save their lives, this is still an emergency.”

The United States is the number one donor with a $4.68 billion contribution already voted by Congress, and France’s total pledge amounts to $1.43 billion.

NGOs welcomed the conference outcome, with Aides boss Marc Dixneuf describing it as a “relief”.

“We consider it a success,” said Abdourahmane Diallo of the RBM Partnership to End Malaria. “Besides the money, the conference has revealed solidarity” between nations, he said.

Sands announced increases in the pledges of all the G7 bloc of rich countries, as well as 20 donations from African governments and 11 new donors from the private sector.

Donations from Africa had doubled from the last meeting, he said.

The Global Fund groups states, NGOs and private firms to support public health programs around the world, investing about $4 billion every year.

It says it has helped save 32 million lives and provided prevention, treatment and care services to hundreds of millions of people, while the yearly number of deaths caused by AIDS, TB and malaria has been slashed by 40 percent since 2002 in countries where the Fund invests. – Rappler.com