Jan 3, 2020 8:12 AM PHT
Agence France-Presse
Facebook Twitter Copy URL
Copied
Several mall operators and convenience stores in Thailand ban single-use plastic bags and will instead see customers paying a small fee for a reusable bag made of a cloth-like fabric 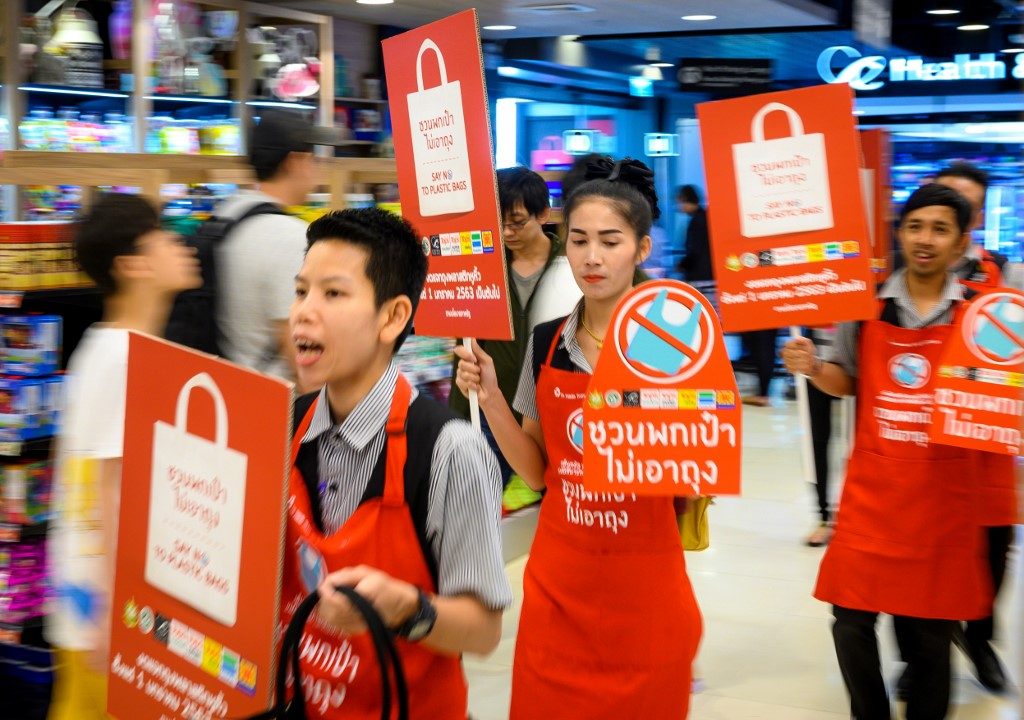 BANGKOK, Thailand –Thai retailers kicked off 2020 with a ban on single-use plastic bags, joining the battle against throwaway carriers in the Southeast Asian nation where citizens go through an average of 8 every day.

The move, taken on Wednesday, January 1, by several major mall operators and the ubiquitous 7/11 convenience stores, will see customers instead paying a small fee for a reusable bag made of a cloth-like fabric.

Thailand is one of the largest contributors to ocean pollution, with plastic bags recently turning up in the stomachs of dead marine mammals like dugongs and green turtles and prompting national soul-searching.

A government campaign to eliminate their use by 2022 has seen television channels pixelating plastic bags onscreen – alongside other no-gos like nudity, smoking cigarettes, alcohol use and violent crime.

While Greenpeace’s Pichmol Rugrod said the move by the retailers was a good start, she added it was “not enough to solve the plastic crisis.”

“We should stop the ‘throw-away’ culture in Thailand,” she said.

The country will continue to produce plastic packaging and lacks a proper waste management policy, she added, while reusable bags are typically made out of a fabric spun from microplastic.

“Microplastic will then create another problem… it affects the environment in terms of when it’s in the soil because it has chemicals,” she said.

And some shoppers like Viroj Sinchairokekul were unimpressed at having to pay for the new bags.

“Instead, I will go to the local markets because they still give us plastic bags,” the 63-year-old said, at a Bangkok mall.

The European Commission estimates some 70% of plastic waste clogs the world’s oceans, killing a range of species from turtles, seals, whales and seabirds to fish and shellfish.