Untouchable: The baby born to a mom with coronavirus 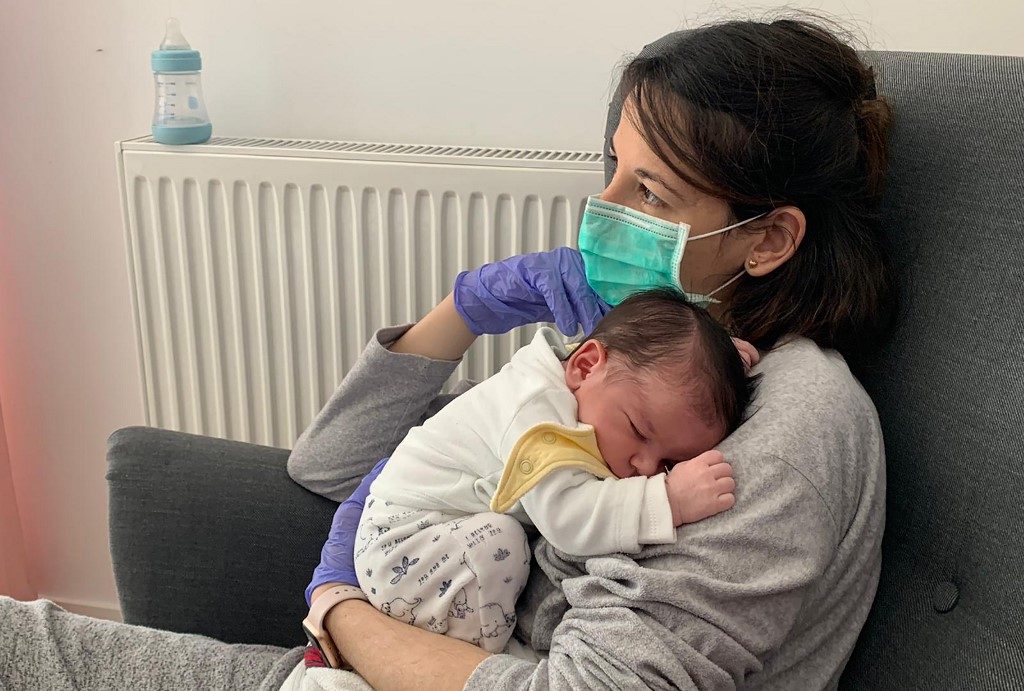 Facebook Twitter Copy URL
Copied
'He grabs your finger, the poor little thing and holds on to the plastic, not on to you. But at least that's another day over, you have to think of it like that otherwise you get depressed,' says Vanesa Muro, mother of Oliver

MADRID, Spain – For 10 days after giving birth to her first child, the mother was not allowed near him after she tested positive for coronavirus, for fear of infecting her newborn.

And even though she has since been reunited with her son, neither she nor her husband have been allowed to physically touch him without gloves as they undergo an extended period of quarantine.

“It’s hard,” says Vanesa Muro at her home in Madrid, the worst-hit area in Spain, a country where more than 10,000 people have died from the virus, the highest number outside Italy.

“He grabs your finger, the poor little thing and holds on to the plastic, not on to you. But at least that’s another day over, you have to think of it like that otherwise you get depressed,” says the 34-year-old.

She had been preparing to have the baby by caesarian section on March 16, but everything changed when her grandmother, who the couple had been seeing every day, caught the virus. She later died.

On March 12, she and her husband tested positive and he rushed her to Madrid’s La Paz University Hospital but he was not allowed in, “so he left me at A&E”, she told AFP.

They decided to operate the next day.

“I felt a whole mixture of feelings, it was horrible,” she says – fear of infecting the baby, nervous about going through it without her husband, and the bizarre sense of being operated on by surgeons completely covered in protective suits.

Back home, her husband was also struggling, knowing she was in surgery but not knowing what was going on.

“It was the longest 90 minutes of my life,” says Oscar Carrillo.

He was put straight into an incubator and kept away from all the other babies until he was tested and found to be free of the virus.

Following 48 hours recovering in hospital in almost total isolation, with the staff entering the room as little as possible because of a lack of protective equipment, Muro was allowed to go home, but had to leave her baby behind.

“It seems silly but even though he was 7 floors below me, he seemed closer to me there than when I was home,” she says.

‘Memory of a nightmare’

It was only 10 days later that the couple, wearing gloves and masks, were allowed to take him home.

“Hey little champion, we’re going to go home now,” were the first words Muro said to her son during their emotional reunion.

“It was like he’d just been born that day.”

For Arantxa Fernandez, a psychologist at the hospital, it was also a very special moment, “the most beautiful I’ve ever experienced in my professional life,” she told AFP.

Throughout the process, Fernandez would send the couple photos and videos of Oliver while he was still in hospital, offering the pair support that they describe as “vital”.

Although they have spent 14 days in quarantine, there are no testing kits to confirm they are free from the virus so they are still wearing gloves and masks.

“I still haven’t touched my son without gloves… we are just dying for the quarantine to end so we can touch him, kiss him,” says Carrillo as his wife gives Oliver a bottle, safety measures in place.

And the new parents are not able to turn to their families for support.

Even though Muro’s parents live very close, Spain’s lockdown means it feels like they are living miles away, Carrillo says.

“It’s hard but we’ll get through it,” says Muro.

“In no time, he’ll be a month old and we’ll be back out on the streets.

“He will get to know his grandparents and aunts and uncles. And all of this will just be a memory of a nightmare that we lived through.” – Rappler.com