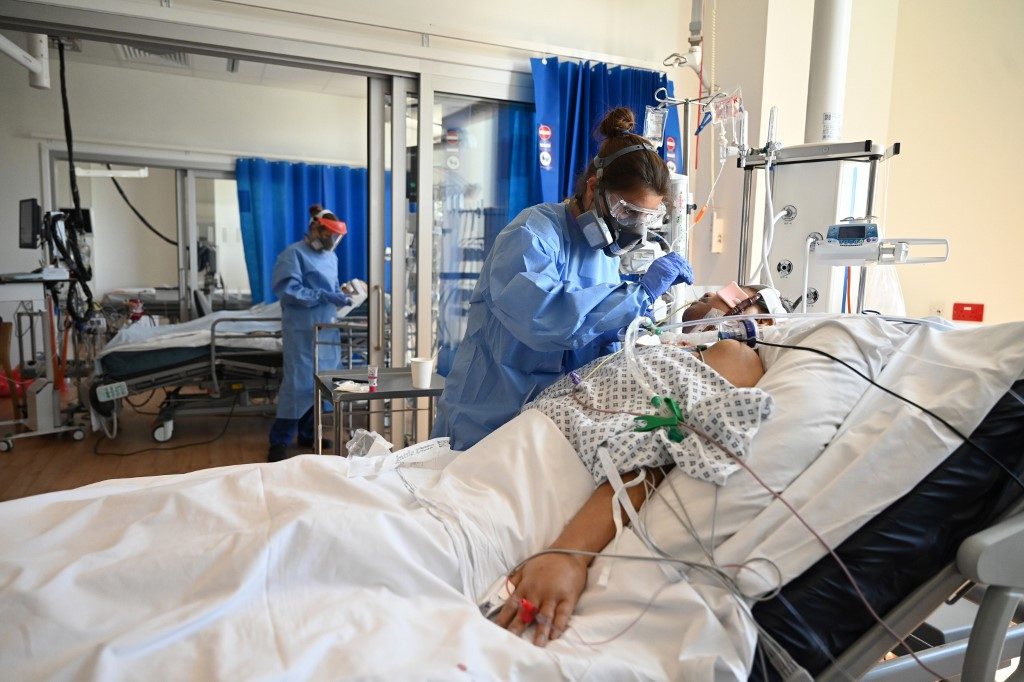 Facebook Twitter Copy URL
Copied
Preliminary results show that among those who could only breathe with the help of a ventilator, dexamethasone reduced deaths by one third, and by one-fifth in other patients receiving oxygen only

LONDON, United Kingdom – The steroid dexamethasone was shown Tuesday, June 16, to be the first drug to significantly reduce the risk of death among severe COVID-19 cases, in trial results hailed as a “major breakthrough” in the fight against the disease.

Researchers led by a team from the University of Oxford administered the widely available drug to more than 2,000 severely ill COVID-19 patients.

Among those who could only breathe with the help of a ventilator, dexamethasone reduced deaths by one third, and by one-fifth in other patients receiving oxygen only, according to preliminary results.

Normally used to treat a range of allergic reactions as well as rheumatoid arthritis and asthma, dexamethasone is an anti-inflammatory.

Daily doses of the steroid could prevent 1-in-8 ventilated patient deaths and save one out of every 25 patients requiring oxygen alone, the team said.

The trial, carried out by the RECOVERY research group that is searching for effective COVID-19 treatments, included a control group of 4,000 patients who did not receive the drug.

“Dexamethasone is the first drug to be shown to improve survival in COVID-19. This is an extremely welcome result,” said Peter Horby, professor of Emerging Infectious Diseases in the Nuffield Department of Medicine, University of Oxford.

“Dexamethasone is inexpensive, on the shelf, and can be used immediately to save lives worldwide.”

Hancock said the government had started stockpiling dexamethasone back in March after preliminary trials showed “early signs” of the drug’s potential.

The trial results are particularly promising as around 40% of COVID-19 patients who require a ventilator end up dying, often because of the body’s uncontrolled inflammatory response to the virus.

For those receiving the new treatment, the mortality rate dropped to less than 30%.

“This is a major breakthrough: dexamethasone is the first and only drug that has made a significant difference to patient mortality for COVID-19,” said Nick Cammack, COVID-19 therapeutics accelerator lead at the Wellcome Trust health charity.

“Potentially preventing one death in every 8 ventilated patients would be remarkable.”

The trial showed dexamethasone to be ineffective in treating patients with milder forms of COVID-19, however.

A number of existing drugs have been trialled as a treatment against the novel coronavirus, with mixed results.

Trials of treatment of the anti-arthritis drug hydroxychloroquine were halted in several countries after a major study in The Lancet medical journal suggested it showed no benefit among COVID-19 patients and even increased the risk of death.

That study has since been retracted due to inconsistencies in the data, but others have come to the same conclusion.

Remdesivir, an anti-viral that appears to reduce the length of treatment in some patients, is already being used in Britain, but one study in April showed it had “no significant clinical benefit.”

The fact that an existing, cheap and largely side-effect free medication has been shown to be effective in severe COVID-19 cases is “of tremendous importance,” according to Stephen Griffin, associate professor in the School of Medicine, University of Leeds.

“There is (now) realistic scope for further improving the clinical management of this devastating disease,” said Griffin, who was not involved in the study.

Cammack said that in light of the study results, dexamethasone “must now be rolled out and accessed by thousands of critically ill patients around the world.” – Rappler.com