S.Africa rhino poaching up, with 277 killed this year 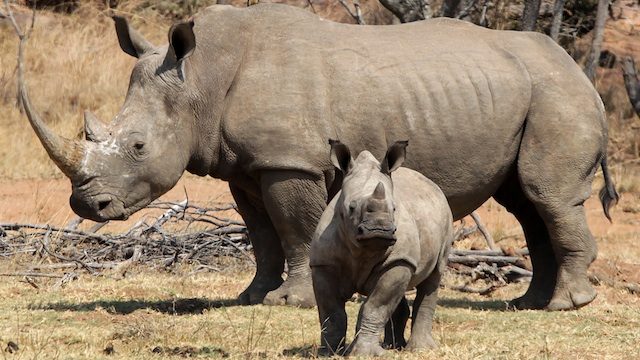 Facebook Twitter Copy URL
Copied
Illegal hunting is up more than a third compared to the same time a year ago, when 203 of the giant animals were slaughtered by poachers, the ministry said

JOHANNESBURG, South Africa – Rhino poaching is on the rise in South Africa, with 277 of the endangered animals killed this year despite government attempts to clamp down on poaching, the environment ministry said Wednesday, April 10.

Illegal hunting is up more than a third compared to the same time a year ago, when 203 of the giant animals were slaughtered by poachers, the ministry said in a statement. (READ: South Africa aims to cut rhino poaching by 20% a year)

More than half of the attacks were in Kruger National Park, where 166 animals were killed in the first three months of 2014, despite the deployment of troops to protect them.

Authorities in the vast national park, which borders Mozambique, have been battling to curb the scourge of rhino poaching that threatens to drive the endangered species into extinction.

Hunters often kill the giant animals inside the heavily-guarded reserve and then escape with their hacked-off horns to Mozambique, where they are then exported around the world, often to Asia.

After “extensive negotiations,” South Africa and Mozambique on Wednesday, April 10, signed a memorandum of understanding to address the escalating crisis.

“South Africa recognises the need for engaging with Mozambique on wildlife management,” the environmental affairs ministry said in a statement.

“The conclusion of the agreement comes as the number of rhino poached in South Africa since the start of 2014 increased to 277.”

Illegal rhino killings in South African parks continue despite the introduction of air and foot patrols, as well as increased numbers of rangers assisted by troops.

So far 32 people have been arrested for poaching related incidents, but authorities could not give the number of cases that had been successful prosecuted.

In 2013, over 1,000 rhinos were poached in South Africa, fuelled by a demand for their horns in Asian countries, where they are believed to have medicinal properties.

In February, conservation groups announced that they will move 100 rhinos to neighbouring Botswana for safekeeping. – Rappler.com