Dinosaur metabolism: not too hot, not too cold

Jun 14, 2014 9:46 AM PHT
Agence France-Presse
Facebook Twitter Copy URL
Copied
The researchers classify dinosaurs in an intermediary category – 'mesotherms' – with metabolic rates closest to those of tuna, certain sharks and the leatherback turtle 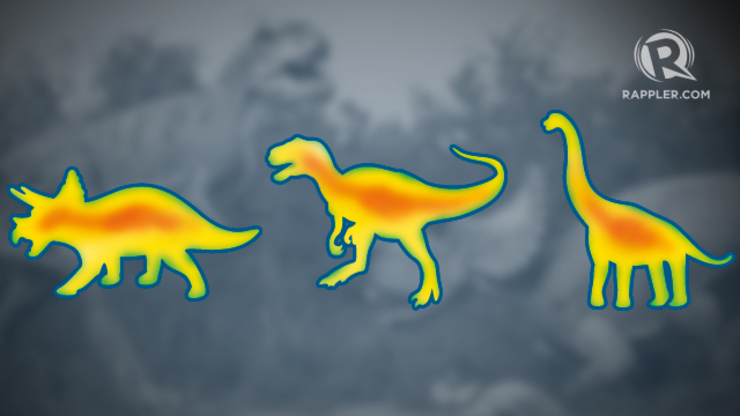 WASHINGTON DC, USA – Dinosaurs weren’t cold-blooded – like modern-day reptiles – nor were they warm-blooded – like mammals and birds, according to a study out Friday, June 13, aiming to answer a question that has intrigued paleontologists for decades.

Instead, the prehistoric creatures’ metabolic rates were somewhere in between, said the report published in the US journal Science.

The results suggest that the common practice of splitting species into two distinct groups – depending on whether animals regulate their body temperature externally or internally – is not accurate.

And the answer could help shed light on dinosaur behavior, since warm-blooded animals tend to be more active and grow faster than their cold-blooded counterparts.

To study the metabolism of the long-extinct creatures, a group of researchers led by University of New Mexico biologist John Grady measured annual growth rings in the fossils of several dinosaurs and estimated growth patterns from birth to adulthood.

They compared the results to a baseline of 400 other animal species, both extinct and still alive, and concluded that the dinosaurs’ metabolic rates were somewhere between cold- and warm-blooded animals.

The researchers classified the dinosaurs in an intermediary category, “mesotherms,” with metabolic rates closest to those of tuna, certain sharks and the leatherback turtle. (READ: First feathered dinosaur fossils found in Canada)

“These animals at times rely on internally-generated metabolic heat to maintain body temperatures, while being subject to external temperatures in others,” the researchers said, adding that the trait is not common among modern-day animals.

The results could help scientists better understand ecosystems in the Mesozoic Era, from 248 to 65 million years ago. The results could also be used to estimate the metabolic rates of other animals from the period. (RESEARCH: Asteroid led to dinosaurs’ extinction)

Scientists have long debated whether dinosaurs were cold- or warm-blooded – and since the 19th century have leaned toward the theory they were warm-blooded, based on physiological factors. (READ: Australia had ‘globe-trotting’ dinosaurs: study)

That theory was bolstered by the discovery of speedy and powerful dinosaurs, like velociraptors, which scientists suggested must have been warm-blooded in order to burn enough energy. (READ: ‘Digging’ for dinosaurs in the PH)

But the authors of the new study said the intermediary metabolism – neither too fast nor too slow – permitted dinosaurs to become much bigger than any other animal and to dominate the ecosystem.

Warm-blooded animals typically need to eat a great deal to maintain their internal body temperature, forcing them into frequent hunts or to eat large quantities of plants. – Rappler.com