Gov’t to crack down on water-polluting Boracay resorts 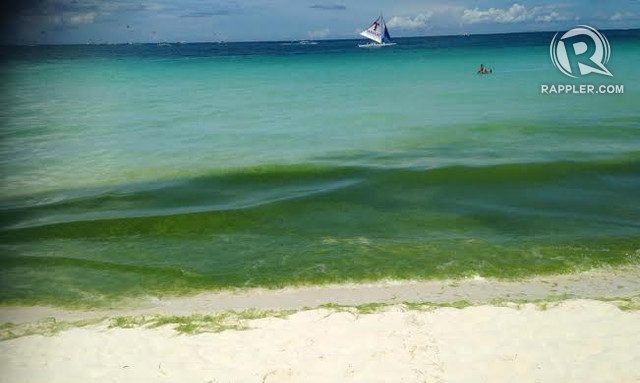 Facebook Twitter Copy URL
Copied
In some parts of the popular tourist island, water pollution levels are already 50 times above the level deemed safe for swimming

MANILA, Philippines – The government vows to stop operations of resorts and other establishments contributing to the pollution of the country’s top vacation island, Boracay.

“We will issue orders of cessation of operation if they don’t comply with our requirements,” said Environment Secretary Ramon Paje on Monday, May 4.

His agency, the Department of Environment and Natural Resources (DENR), is close to completing an inventory of establishments in Boracay Island that have no environmental permits and that flout environmental regulations, he added.

After the completion of the inventory, violation notices will be sent to the establishments so they can address the violations.

Those that do not have their own sewage treatment plants will be required to connect to the island’s sewerage system. If the business owners refuse to do so, the DENR will order them to stop their operations.

From first attracting tourists with its fine white sand and azure waters, it has evolved into a “party island” teeming with commercial establishments. (READ: Boracay: Paradise lost?)

Its the lack of sewage treatment plants that trigger extreme levels of water pollution in an island that, ironically, became popular for its natural beauty.

One very visible symptom of pollution is the proliferation of green, slimy algae along its famous shoreline, said Paje.

The green algae is common in Boracay during summer months because of the large number of people that flock to the island. Unfortunately, the limited sewerage infrastructure on the island cannot manage all the waste generated by this population explosion.

The summer season is also often characterized by calm waters which allow the green algae to gather.

During the rainy season when waters are rough, wave action dilutes and washes away the algae.

Water samples taken by the DENR indicate that the island remains safe for swimming.

But if the water pollution persists, that may not be the case for long.

Already, the government has detected unsafe swimming waters in some parts of the island. (READ: 55 die daily in PH from lack of proper sewerage)

In a beach in Sitio Bulabog where drainage empties into the sea, the DENR detected coliform bacteria levels of 47,460 most probable number (mpn) per 100 milliliter – almost 50 times the safe level.

The coliform bacteria level deemed safe for swimming and other contact activities is 1,000 mpn/100ml.

Coliform bacteria comes from the excrement of animals and humans or from decaying organisms. Aside from being a health hazard, too much coliform bacteria in sea waters harm marine life and coral reefs.

A lack of sewerage systems is endangering other top tourist destinations like Coron in Palawan. – Rappler.com