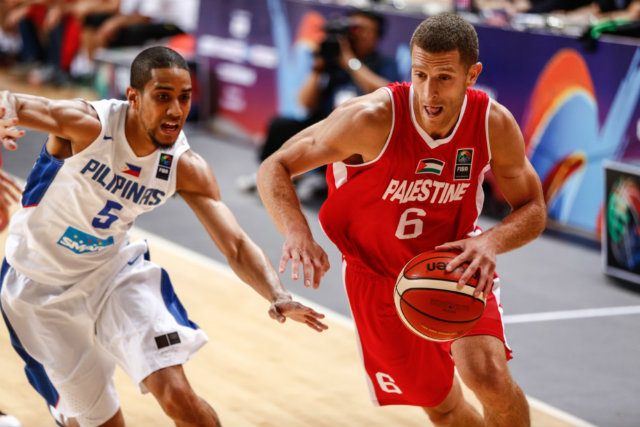 MANILA, Philippines (UPDATED) – The Philippines got off to a terrible start in their quest for an Olympics ticket as the debuting Palestine stunned Gilas Pilipinas, 75-73, in Group B action of the 2015 FIBA Asia Championship on Wednesday, September 23 at the Changsha Social Work College Gymnasium in Changsha, China.

The Philippines led by as much as 15 early in the first half and held the advantage most of the way before an Jamal Abu Shamala 3-pointer shoved Palestine ahead by a hair, 72-71, with 1:35 remaining.

Andray Blatche, who had a good performance for Gilas overall in his first game out despite being out of shape for the past two months, put Gilas back on top 73-72 but Sani Sakakini converted the go-ahead 3-point play with 15.8 left.

The Philippines had a chance to win it in the final possession but Blatche’s triple attempt was blocked as time expired.

Only 4 Palestinians made it on the scoreboard all game long. The 6-foot-5 forward Abu Shamala was not subbed out at all and played the full 40-minute game to lead the charge with 26 points, 15 rebounds, 3 assists and a steal. He also went 6-of-10 from downtown and 10-of-23 overall from the field.

Like Abu Shamala, Sani Sakakini also logged in 40 minutes of play to post 22 points, 13 rebounds, 3 assists and two steals. His brother, Salim Sakakini, added 10 points and 11 rebounds in over 23 minutes of play.

Imad Qahwash contributed added 17 points and also registered a 40-minute outing to round out the small scoring party for Palestine that was enough to overturn the deeper bench of Gilas.

Blatche posted a double-double of 21 points and 12 rebounds despite being shackled in the second half after pouring 14 points in the first.

Gilas rookie and revelation Terrence Romeo was relatively quiet with just 11 points on a miserable 4-of-13 field goal shooting off the bench. Jayson Castro, known internationally as Jayson William, added 10 points and only a single assist.

The Philippine national men’s basketball team let go of its strong start and eventually gave in to complacency by the second period as Palestine chopped a 45-33 lead with 1:21 left in the second to just 45-40 at halftime following a series of defensive lapses.

The Filipinos allowed their FIBA Asia rookie foes to stay within striking distance in the second half with sloppy offensive executions, a relaxed defense, and a number of miscues that amounted to 15. Gilas was also out-rebounded 53-58.

(IN PHOTOS: Gilas Pilipinas in wacky mood at photo shoot)

It was an unexpected loss for Gilas, who is ranked 31 in the world by FIBA while Palestine is unranked.

Gilas will have a chance to redeem themselves when they play Hong Kong on Thursday, September 23 at 9:30 am, and Kuwait on Friday as they try to advance past the group stage.

Hong Kong opened up group stage play with an 87-50 win over Kuwait. – Rappler.com