Manny Pacquiao says he is close to retirement

Oct 7, 2015 2:19 PM PHT
Agence France-Presse
Facebook Twitter Copy URL
Copied
"I think I'm ready (to retire). I've been in boxing for more than 20 years," says Pacquiao, who says he will focus on being a senator should he win 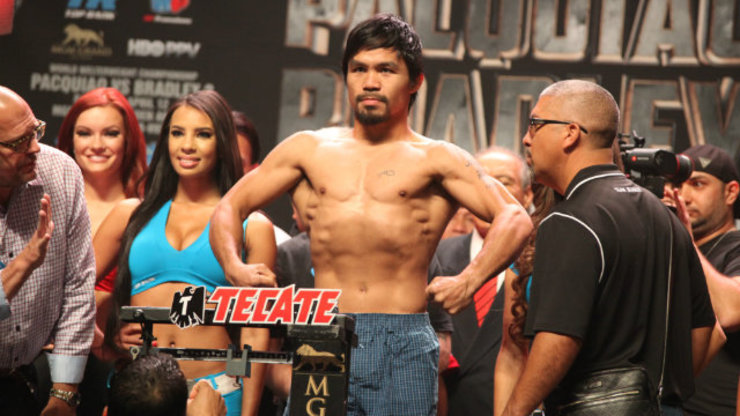 MANILA, Philippines – Philippine boxing hero Manny Pacquiao announced Wednesday he would likely retire next year after one last fight to focus on a career in politics, hopefully as a senator.

The born-again Christian, winner of an unprecedented 8 world titles in as many weight divisions and at times touted as a future president of the Philippines, said he had taken career advice from God.

“I prayed to God for guidance and I am happy about it.”

Pacquiao turned professional when he was 16 years old and has won 57 fights, including 38 knockouts while losing six, three of them knockouts. Two other bouts ended in a draw.

He lost a unanimous decision in May to unbeaten American Floyd Mayweather in boxing’s richest bout, which the Filipino fought with a torn rotator cuff in his right shoulder.

Pacquiao, a congressman since 2010, announced this week his bid for a senate seat in national elections to be held in May next year.

“I will have to give up the other things that require my attention. If you are a senator, your focus should only be your job and your family,” he said in the interview.

Before the elections, Pacquiao said he planned to climb into the ring that has made him one of the world’s richest sportsmen for what would probably be one last time.

He has yet to pick his next opponent, and said he was not ruling out a rematch with Mayweather, even though the American has already announced his retirement.

A rags-to-riches Philippine idol, Pacquiao, a former street vendor, has shrewdly parlayed his boxing success into a career in show business, product endorsements and politics.

Now representing his southern province of Sarangani in the lower chamber of congress, the pint-sized Pacquiao is also an improbable professional basketball player and a Christian pastor.

He was mercilessly criticized on social media this week after it was reported he had attended just 4 legislative sessions out of 70 this year due to sporting and other commitments.

Despite this, the latest pre-election surveys put him in the winning circle of the 12 senatorial slots up for grab at the polls.

Pacquiao pledged he would be a “serious” senator should he win in May.

“I will not be absent because the whole country would be my responsibility,” he said. – Rappler.com