Nov 14, 2015 11:58 AM PHT
Agence France-Presse
Facebook Twitter Copy URL
Copied
When 3 loud explosions were heard from outside Stade de France, football soon drifted from the minds of spectators during the friendly match between France and Germany 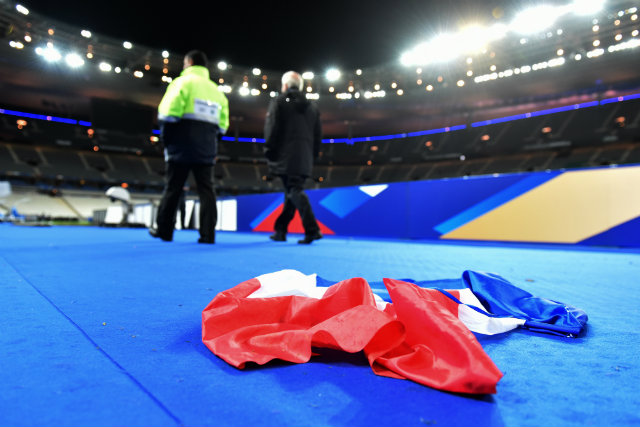 PARIS, France – It started as a celebration of football, a glamour friendly between France and world champions Germany in front of 80,000 fans at Paris’s showpiece Stade de France.

Then they heard the explosions.

“I thought it was just a firework, then my friends told me what was going on in Paris,” said a French fan in his 20s as the grim reality of Friday’s deadly attacks suddenly hit home.

When 3 loud explosions were heard from outside the stadium during the first half, football soon drifted from the minds of the spectators when it eventually emerged that 3 people had died near the arena in the north of the city. The explosions were also heard through the broadcast.

Later, the death toll climbed to 5 outside the glittering venue which staged the 1998 World Cup final with 11 seriously hurt and around 30 people slightly injured.

It emerged that one of the explosions was near a McDonald’s restaurant on the fringes of the stadium.

A police source later said that one of the blasts was caused by a suicide bomber on the Rue Jules Rimet.

“A man wearing an explosives belt blew himself up,” said the officer.

French president Francois Hollande, who was in attendance at the game, was hurried from the stadium amid the early reports of shootings in central Paris and of the developing hostage crisis in the Bataclan theatre.

“The game’s going on and it’s awful – I’ll be honest, I’m very spooked,” said an AFP journalist as the match progressed.

At first, very few, if any, of the crowd appeared to be aware of the significance of what was happening despite the appearance of helicopters low in the sky overhead during the second half and the audible sound of sirens from outside.

The crowd still loudly celebrated goals by Olivier Giroud and substitute Andre-Pierre Gignac late in either half of the match that gave France the win.

However, with tight security building up around the stadium, there was evident confusion after the final whistle. 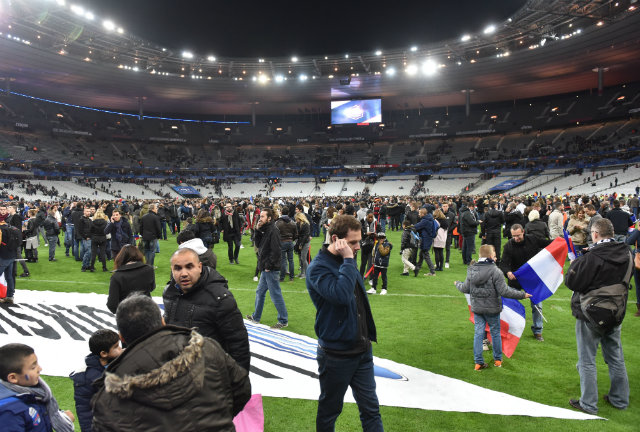 With exit points being restricted, large numbers of fans poured onto the pitch.

There was no visible sense of panic, but it was after 11:30pm local time (2230 GMT) before the pitch was emptied.

“One of the fast food restaurants was being searched by police forensics and officers dressed in white outfits,” added an AFP reporter outside the ground.

The evacuation of the fans finished at around midnight, many heading for their cars, others to catch the train back into the city.

“The RER B (one of the main suburban train lines serving the station) isn’t working…It’s a black Friday the 13th,” said 27-year-old Sarah Gopal, carrying a French flag in her hand.

The drama followed events earlier in the day when the German team was evacuated from their plush hotel in the west of Paris following a bomb scare.

When the players left the field at the end of the game, they had other concerns on their minds which went beyond the significance of the game.

As they gathered in the tunnel, world famous superstars like Germany’s World Cup winner Thomas Mueller and Arsenal striker Giroud immediately turned their attention to the TV screens, staring blank-faced as the horror on the streets of Paris unfolded. – Andy Scott, AFP/Rappler.com