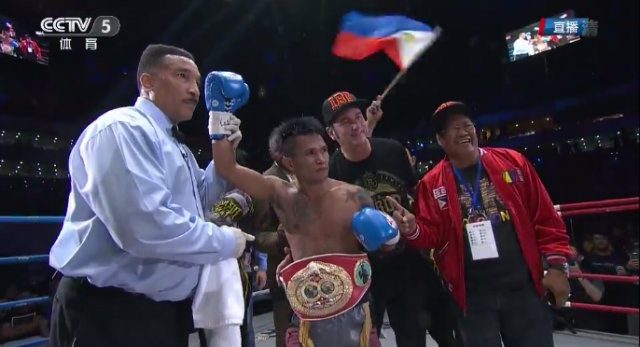 MANILA, Philippines (UPDATED) – Johnriel Casimero got the revenge he sought in his rematch with Amnat Ruenroeng, knocking out the previously unbeaten Amnat Ruenroeng to win the IBF flyweight championship on Wednesday, May 25 in Beijing, China.

Casimero, a former IBF junior flyweight champion, knocked Ruenroeng down in round 4 with a counter left hook to the chin before finishing him off with a left hook to the body. The official time was 2:10.

Johnriel Casimero has done it! He knocks out Amnat Ruenroeng in round 4 to win the IBF flyweight title #boxing pic.twitter.com/yeozydj5Oy

The win was sweet revenge for Casimero (22-3, 14 knockouts) of Ormoc City, Philippines, who absorbed a bitter loss in their first fight last June after dubious officiating allowed Ruenroeng (17-1, 5 KOs) of Chonburi, Thailand to foul Casimero repeatedly. Casimero had not fought in the 11 months since then to preserve his mandatory rematch status.

This time the IBF selected well-known Las Vegas-based referee Tony Weeks, who warned the 36-year-old Ruenroeng about holding and rough-housing. Ruenroeng, who was making the sixth defense of the title he won in 2014, controlled the first round with his counter-punching before the quicker-footed Casimero, 26, began to close the distance and land to the head and body in round two.

The pre-fight weigh-in was marred by confusion after both fighters initially weighed in over the 112-pound weight limit, with Ruenroeng weighing 117.75 pounds and Casimero coming in at 113.25.

The IBF, which was hosting the fight at its annual convention, later said that weigh-in at the Great Wall of China was only a photo opportunity, and that the ground was not level, according to a report by Jake Donovan. The IBF spokesperson added that both men made the weight officially at the hotel.

Casimero was accompanied by his trainer Jhun Agrabio and matchmaker Sean Gibbons, plus promoters Sammy Gello-ani and Sampson Lewkowicz.