Jul 9, 2016 5:25 AM PHT
JR Isaga
Facebook Twitter Copy URL
Copied
Jeffrey Arienza will face Wellem Reyk in a 12-round fight, plus Silvester Lopez returns to action in a rematch against Danilo Pena 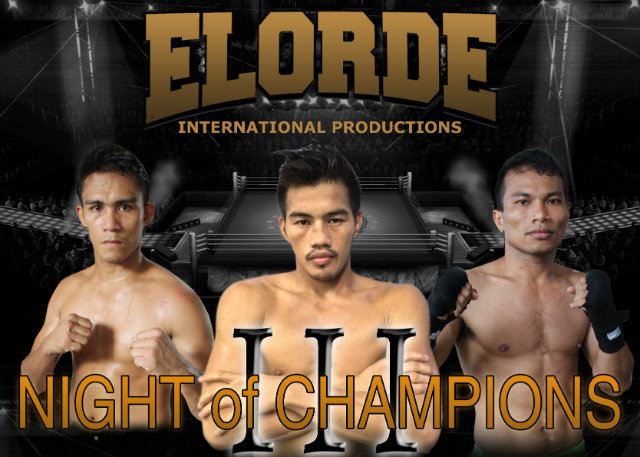 MANILA, Philippines – Surigao-based southpaw Jeffrey Arienza will face Indonesia’s Wellem Reyk for the WBC Asian Boxing Council (ABCO) junior welterweight belt in the 12-round main event of “Night of Champions III,” which will be promoted by Elorde International Productions Wednesday, July 13 at Mall of Asia Music Hall in Pasay City.

Arienza (14-4-1, 8 KOs) has won two fights since losing back-to-back fights abroad, while Reyk (18-13-4, 5 KOs) is coming off a decision win over compatriot John Ruba in February and had previously defended the Indonesian junior welterweight championship 5 times.

Lopez, 28, of Kabasalan, Zamboanga Sibugay had previously beaten Pena, 34, of Tiwi, Albay by 12-round decision in their first fight, and hasn’t lost on Philippine soil since 2007.

Lopez is hoping to regain the form he had once displayed when he held minor titles like the WBC Silver and WBC International junior bantamweight belts, which earned him a world title fight against Japan’s Yota Sato in 2012. Lopez lost to Sato by unanimous decision but hasn’t fared well internationally as of late, losing 7 bouts abroad in the 4 years since.

“Mayroon pa ako. May dalawang taon pa ako. Lalo lang akong nag-eensayo at natutututo,” Lopez said in a statement. (I still have some left. I still have two years. I just keep on practicing and learning even more.)

The show begins at 5 pm and is free to the public. – Rappler.com