Ginebra keeps its energy high to turn back Meralco 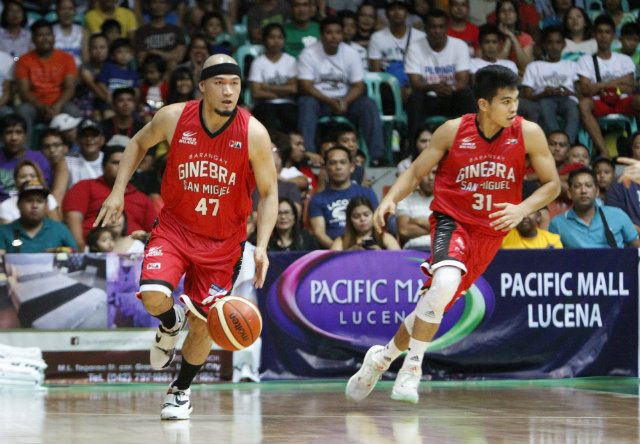 MANILA, Philippines – Barangay Ginebra San Miguel came out with plenty of energy and never really fully softened up on the gas pedal on their way to a 107-93 victory over the Meralco Bolts in the 2016 PBA Governors’ Cup on Saturday, July 30 at the Quezon Convention Center in Lucena.

Import Justin Brownlee had a game-high 26 points with 3 rebounds and 6 assists. Solomon Mercado, who took over late in the game to keep Meralco at bay, finished with 19 points and 4 assists on 5-of-6 field goals including 6-of-7 free throws.

Coach Tim Cone benefitted from quality contributions all around with Japeth Aguilar registering 15 points and 6 rebounds on 7-of-9 shooting from the field.

Even Ginebra’s bench was productive with veteran Mark Caguioa coming up with 13 points, 6 rebounds, and two assists.

His backcourt partner Jayjay Helterbrand had two points and 3 rebounds as both boosted a Ginebra counter-attack in the third quarter to dispell Meralco’s threat when they tied the ballgame briefly.

The Gin Kings’ confidence was at an all-time high from the beginning, as they found their comfortable spots, moved the ball well, and made high-percentage shots to lead by as much as 16 points early on.

The Bolts rallied to keep it close by halftime and ultimately tying the count at 68 at the 3-minute mark of the third on a Jimmy Alapag trey.

Ginebra responded with a 13-3 run to end that period and enter the fourth comfortably ahead, 81-71.

The Gin Kings’ smooth-flowing offense kept on giving in the payoff period as they maintained the edge and ultimately blew up the lead late, climbing to a 3-1 record after the final buzzer.

Cliff Hodge led Meralco with 19 points and 7 rebounds, while Reynel Hugnata came up with 18 points and 8 rebounds off the bench.